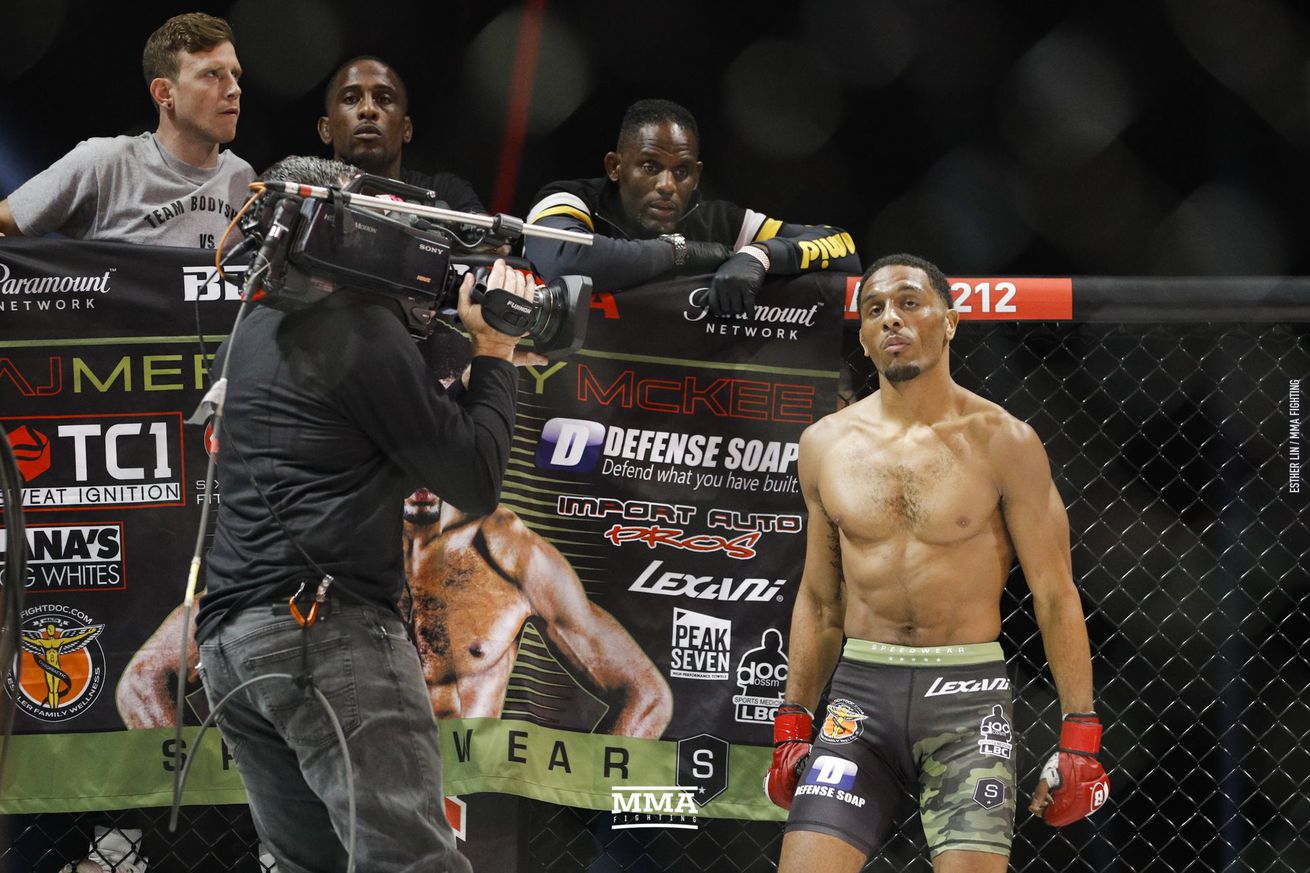 The unbeaten 24-year-old confirmed with MMA Fighting that he tore the lateral collateral ligament in his left knee during his most recent bout against Derek Campos at Bellator 236 in December. News of McKee’s injury was first reported by The Athletic.

McKee went on to defeat Campos by third-round submission, which moved him into the semifinals of Bellator’s ongoing tournament that will see the winner claim the Bellator featherweight title and a $1,000,000 prize. He is currently scheduled to fight former bantamweight champion Darrion Caldwell next, with the date still to be determined.

According to McKee, he expects the Caldwell fight to be booked for an event in the summer, and if that’s the case, it’s possible that he will have recovered in time to return to competition.

“The doctor actually told me not to get surgery,” McKee said. “He said if I plan on fighting, don’t get the surgery. The recovery time is four to eight months. The fight is exactly, let’s see, I got the surgery end of January, so February, March, April – it’s cutting it close, you know what I mean, to be fully recovered and whatnot.

“But for me, it’s like my dad said, ‘If you’re not 100 percent, you’re not gonna fight. Your record, where you’re at right now, it’s not worth risking for a million dollars,’ just because of the caliber that not only he feels, but I feel that I’m at and just continuing to get better.”

McKee is currently 16-0 as a pro with eight first-round finishes on his resume. All of his bouts have taken place under the Bellator banner.

Before fighting Campos, McKee added two-time featherweight champion Pat Curran and former World Series of Fighting champion Georgi Karakhanyan to his list of conquests. Campos did not have the accolades of Curran and Karakhanyan, but he proved to be a tough out especially after McKee suffered his injury early in their contest.

“It happened in the first 30 seconds of the fight,” McKee said. “I threw the spinning heel kick, and when I threw that spinning heel kick, I fell. I fell on my ankle, I didn’t land on my feet, so from there it’s like taking the support out of a building. It tumbled and it went from my ankle to my knee, and then from my knee to my hip and my shoulder. So it was like a whip effect. Immediately, my entire leg just went numb.

“So I knew, the adrenaline’s kicking right now, everything’s a little skeptical, but I was hanging in there, you know? I’m like, ‘Alright, well it’s time to get him outta here.’ I knew the adrenaline was going to wear off. But f*ck, that dude Campos, he can take some damage, boy. That’s the hardest I’ve ever hit someone in my life. I was hitting him with some punches and looking at him like, ‘How did you just take that?’”

“He tore it in the first round,” Antonio said. “He came back—If you go watch the fight and listen, A.J. comes back the first round and said, ‘My knee popped when I did that.’ That’s why he went on his back.”

In contrast to Antonio’s confidence, A.J. said he plans to see how rehab therapy goes before making a decision on whether to go through with the Caldwell fight. He wants to continue training and working on aspects of his game that don’t put undue stress on his injured leg.

“There’s other things I can work on besides grappling and having to kick, so I think it’s a really good time for all my teammates right now,” McKee said. “Iron sharpens iron, so I’m in the gym watching them train and helping them out with just the knowledge that I have myself.”

If McKee does bow out, he would ideally like to give a potential replacement enough time to properly prepare for their Grand Prix semifinal opportunity.

“Out of respect out of whoever is going to fill in for me, if I choose not to fight, I would want them to have a full camp so that I’m not just feeding them to a wolf,” McKee said. “I want to give them that opportunity to prepare for battle.