Conor McGregor’s UFC 246 team in Las Vegas
This topic has been deleted. Only users with topic management privileges can see it.
F
F
fightgal Reply Quote 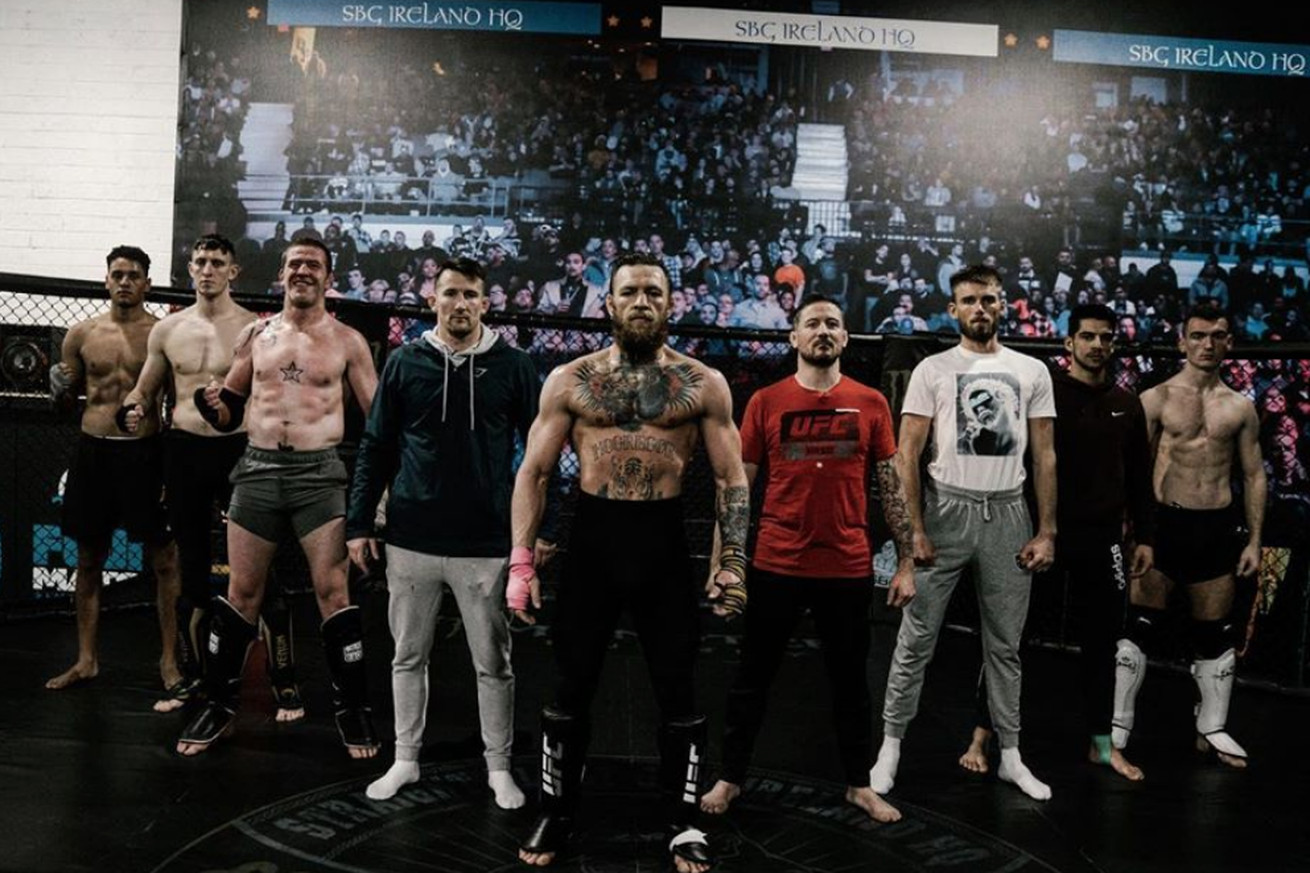 There are many familiar faces surrounding Conor McGregor in Las Vegas as he gears up for his welterweight bout against Donald Cerrone on Jan. 18, but there are a number of new coaches and training partners that have been introduced to the fold as well.

Given that McGregor’s best known training partners, Artem Lobov and Peter Queally, compete lighter than 170 pounds, new bodies were necessary. While Lobov and Queally were no doubt involved in camp, they did not travel to Sin City in the final weeks before the fight.

In addition to training partners, McGregor also brought coaches from his early years as an amateur boxer. McGregor even has a media team and an Irish DJ on call to supply the soundtrack for all of his training sessions.

John Kavanagh has been the main man in McGregor’s corner ever since he took his first steps into MMA as a prosperous teenage amateur boxer. Kavanagh anticipates “a masterpiece” from McGregor based on what he has seen in training sessions. Kavanagh is a BJJ black belt, a former professional fighter and the head coach of SBG Ireland.

Owen Roddy is an Irish MMA legend and one of the first fighters McGregor met after walking into SBG for the first time. After retiring as a pro fighter, Roddy became McGregor’s full-time striking coach. He is also a BJJ black belt and the head coach of SBG Charlestown.

Dr. Julian Dalby and Colin Byrne are at the forefront of McGregor’s strength and conditioning training. They also are the developers of the McGregor Fast program. Byrne introduced McGregor to Dalby, a doctor with experience in professional cycling and powerlifting. Byrne opened Shinobi Academy in Lagos, Portugal, after training at SBG.

Team 'McGregor FAST conditioning' working hard in the desert today! Sign up to the program now at www.mcgregorFAST.com! @conormcgregorfast

Solid work at @sbgnaas tonight with our head of wrestling @sergey_pikulskiy. This man has changed Irish wrestling forever already, yet in reality he is just at the beginning of where he is going with this. These kids coming up through him, with big aspirations to compete in pure wrestling, are astounding! Leading the charge is his own young son @albertpikulskiy. Ireland has not had this before and to see it form and take shape in the flesh is quite something. What a unit! #TeamSBG #TeamMcGregorFAST

Phil Sutcliffe Snr. and Bra Brady are the latest coaches to be drafted into the Team McGregor. The Irishman’s left cross can be traced back to his tutelage under two-time Olympian Sutcliffe, who was McGregor’s first coach at Crumlin Boxing Club. Brady is Sutcliffe’s right-hand man at the prestigious South Dublin boxing gym.

Dillon Danis may have not been present for the duration of McGregor’s UFC 246 camp, but has been on the scene ever since the Irishman landed in Vegas. Danis was first drafted into the SBG frontrunner’s camp when he was preparing for his UFC 202 rematch with Nate Diaz.

can’t appreciate the sun if you have never stood in the rain...

John Michael Sheil has been a mainstay within SBG for the last decade. Sheil usually competes as a middleweight and was considered to be among the best in the category nationally for a number of years. Shiel holds notable wins over Victor Cheng and Ross Pointon.

Nice work from the boss tonight. Nd we were sharing him. New home a gym in vagas.

Lee Hammond is a world champion as an amateur MMA fighter. The Dubliner is noted for his slick submission skills and is the first person to execute a berimbolo sweep in MMA competition. Hammond has been in the former double champion’s camps ever since he was a teenager.

Nikolay Grozdev is 2-0 professional fighter known for his stellar wrestling skills. He has trained at SBG for a number of years. 2019 marked his first year in the professional ranks.

At the Super Bowl with @thenotoriousmma and @conormcgregorjr . Always grateful to be with him seeing the world. And seeing the way it should be in this world)) @ginger_beard_photos

Tristan Barnett is a K-1 fighter who trains out of SBG Ireland. He has competed in a variety of different combat sports and has won national titles in kickboxing.

Jack Hamill is an amateur welterweight fighter who trains out of SBG Ireland. As well as amateur mixed martial arts competition, Hamill has also competed in amateur boxing.

Eoin Sheridan is an amateur middleweight fighter and an Irish K-1 champion. He has represented Ireland in MMA at the amateur level, at the recent world championship event in Bahrain in November.

Craig Kavanagh is an amateur boxer that trains at Crumlin Boxing Gym under the watchful eyes of Phil Sutcliffe Snr. and Bra Brady. Kavanagh is a four-time All Ireland amateur boxing champion.

A post shared by Crumlin Boxing Club (@crumlinboxingclubofficial) on Oct 5, 2019 at 8:44am PDT

Vasile Bria is a Moldovan massage therapist who has worked with “The Notorious” ever since his run to the UFC featherweight title. Also known as “Dr. Pain” — as christened by McGregor — Bria has travelled to multiple events with the former featherweight and lightweight champion.

Bissett is a Dublin based producer/DJ that was drafted in to provide a soundtrack for McGregor’s pre-UFC 246 training sessions.