Pedro Munhoz remembers first encounter with Jose Aldo before MMA debut
This topic has been deleted. Only users with topic management privileges can see it.
F
F
fightgal Reply Quote 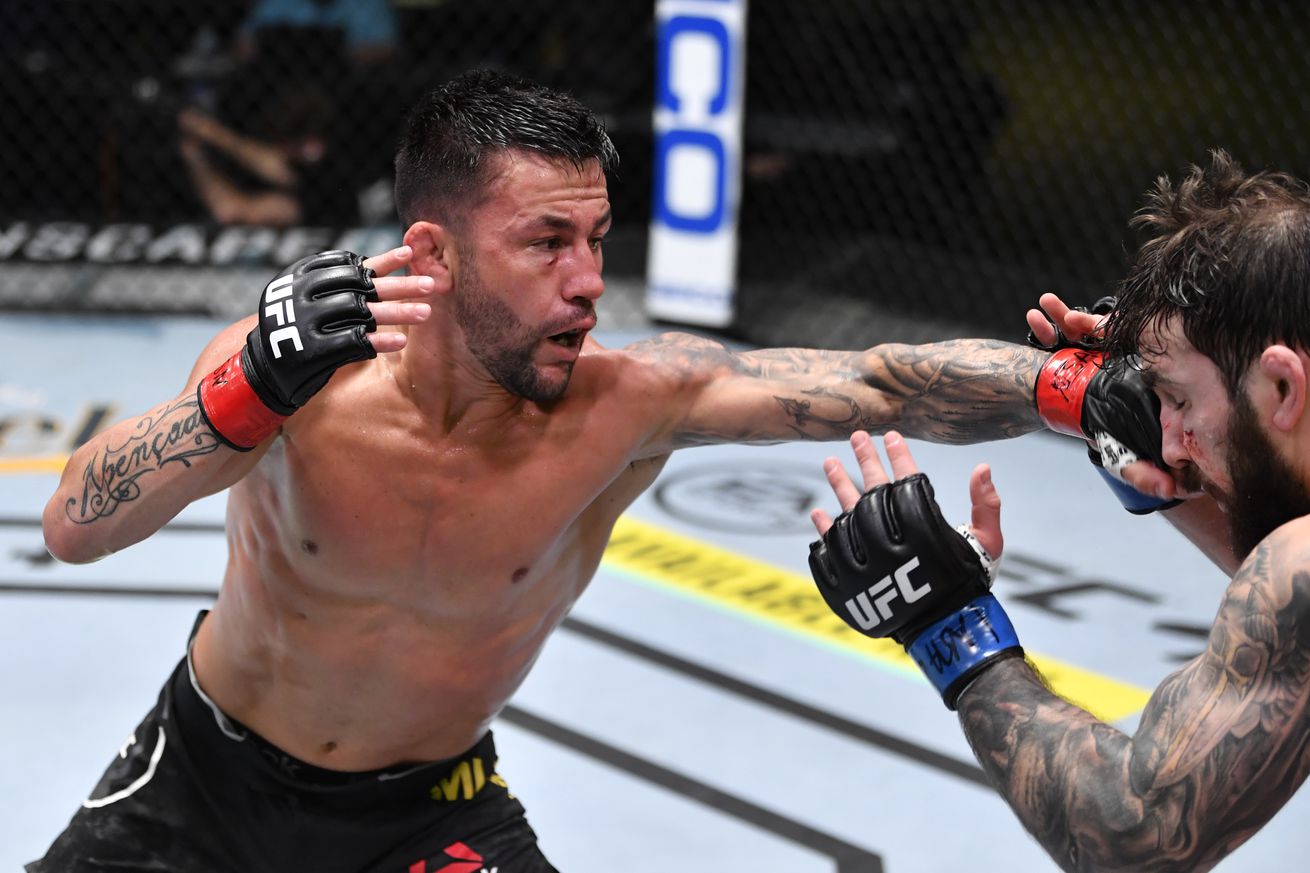 Pedro Munhoz built his MMA career looking up to fighters like Jose Aldo as inspiration. Thirteen years after meeting him for the first time in Brazil, “The Young Punisher” aims to stop Aldo’s rise in the UFC bantamweight division when they collide in the co-main event of Saturday night’s UFC 265 in Houston, TX.

Like Aldo, Munhoz began his journey in the martial arts world by training jiu-jitsu before falling in love with boxing and muay Thai. Munhoz’s MMA debut took place in March 2009, just 20 days after Aldo moved to 4-0 under the WEC banner. They had already met a year before, however.

“I first met Jose Aldo many years ago,” Munhoz said in an interview with MMA Fighting. “I didn’t even fight MMA. I was accompanying a Japanese fighter who fought at an event in Teresopolis. Jose Aldo was there and I met him. We didn’t get to talk, but it was the first time I saw him in person. I’ve always admired and respected him for his [life] story and his history in the sport.”

Munhoz, a jiu-jitsu black belt at the time, travelled from Sao Paulo to Teresopolis to corner Takafumi Otsuka against Rafael dos Anjos in the main event of Fury FC 6, the fight that catapulted dos Anjos to the UFC. Otsuka trained with Marco Barbosinha and became closed friends with Munhoz.

Aldo wasn’t a star in Brazil yet, but had just scored the biggest win of his career up until that point, destroying Shooto legend Alexandre Nogueira in his WEC debut a month before.

“I knew [Aldo] was a good athlete,” Munhoz said. “I had watched his fight against ‘Pequeno,’ whom I had also trained with when I was 16 or 17. [Nogueira] was one of the guys that made me realize that a guillotine was a very efficient move that could finish the fight at any moment. He was also very important in my career in jiu-jitsu and in sports [in general].”

Munhoz made his MMA debut a year later, stopping future The Ultimate Fighter Brazil winner Reginando Faria with punches. Up to 3-0 in the sport in a year’s time, Munhoz packed his bags and moved to the United States looking for better opportunities, and he once again ended up rubbing shoulders with Aldo.

“I don’t know if he remembers this, but I remember quite well,” Munhoz said of seeing Aldo in 2010, when the Brazilian already held the WEC championship. “He was with [Jorge Guimaraes] ‘Joinha’ and stopped by Rigan Machado’s gym. I lived in the gym at the time and taught classes in the gym [and] also trained at Black House.”

Munhoz never thought for a second he would face Aldo in MMA, given that the Nova Uniao star was sitting at the top of the featherweight division and he had made his name at 135 pounds.

“I was very happy when they offered me this fight against Jose Aldo [at UFC 265],” Munhoz said. “Like every Brazilian, Jose Aldo has always brought me inspiration. I was always watching every time Jose Aldo fought. I never imagined myself fighting him, before he talked about moving down to bantamweight, because, to me, he would retire as a legend at featherweight.

“From the moment I heard he was going down to bantamweight, I thought it was very interesting, but still didn’t imagine myself fighting him so soon.”

Munhoz realized a clash with the “living legend of the sport” inside the octagon was a possibility when he realized they were ranked next to each other.

“I’ve always rooted for him,” Munhoz said. “I didn’t think twice before embracing it when I got the call from the UFC offering me a fight with Jose Aldo. I was really happy with this offer.”

Aldo isn’t in his prime anymore, having lost six of his past 10 since 2015, but won a decision over Marlon Vera in his most recent octagon appearance. That said, Munhoz still sees this match as a highlight in his career.

“I’ve done many interviews since 2010 and always said Jose Aldo’s name when asked for five names in the sports that impacted me,” Munhoz said. The other four names are B.J. Penn, Frankie Edgar, Edson Barboza and Ross Pearson.

”I’ve always watched his fights, analyzing things that I could add to my game,” he continued. “Just like Aldo, I also came from jiu-jitsu, and we started fighting MMA after getting my black belt, but we both like to fight on the feet.”

Munhoz won a decision over Jimmie Rivera in February, bouncing back to the winning column following a close decision defeat to Frankie Edgar in 2020. Despite the admiration he has for the fellow Brazilian, Munhoz won’t hold anything back at UFC 265.

“I come out with fire from the get go,” Munhoz said. “I like to impose my rhythm and look for an opening. Sometimes I expose myself a little bit too much, some people think, but it’s part of my strategy. This fight with Jose Aldo will be no different.

“Jose Aldo is an athlete I admire and respect. The way I show admiration and respect is by doing my best in there and going for the knockout or the submission. The strategy won’t change. The respect won’t change, but I don’t envision this fight lasting three rounds.”