Kris Moutinho feels Sean O’Malley ‘was getting a little scared towards the end’ of UFC 264 fight
This topic has been deleted. Only users with topic management privileges can see it.
F
F
fightgal Reply Quote 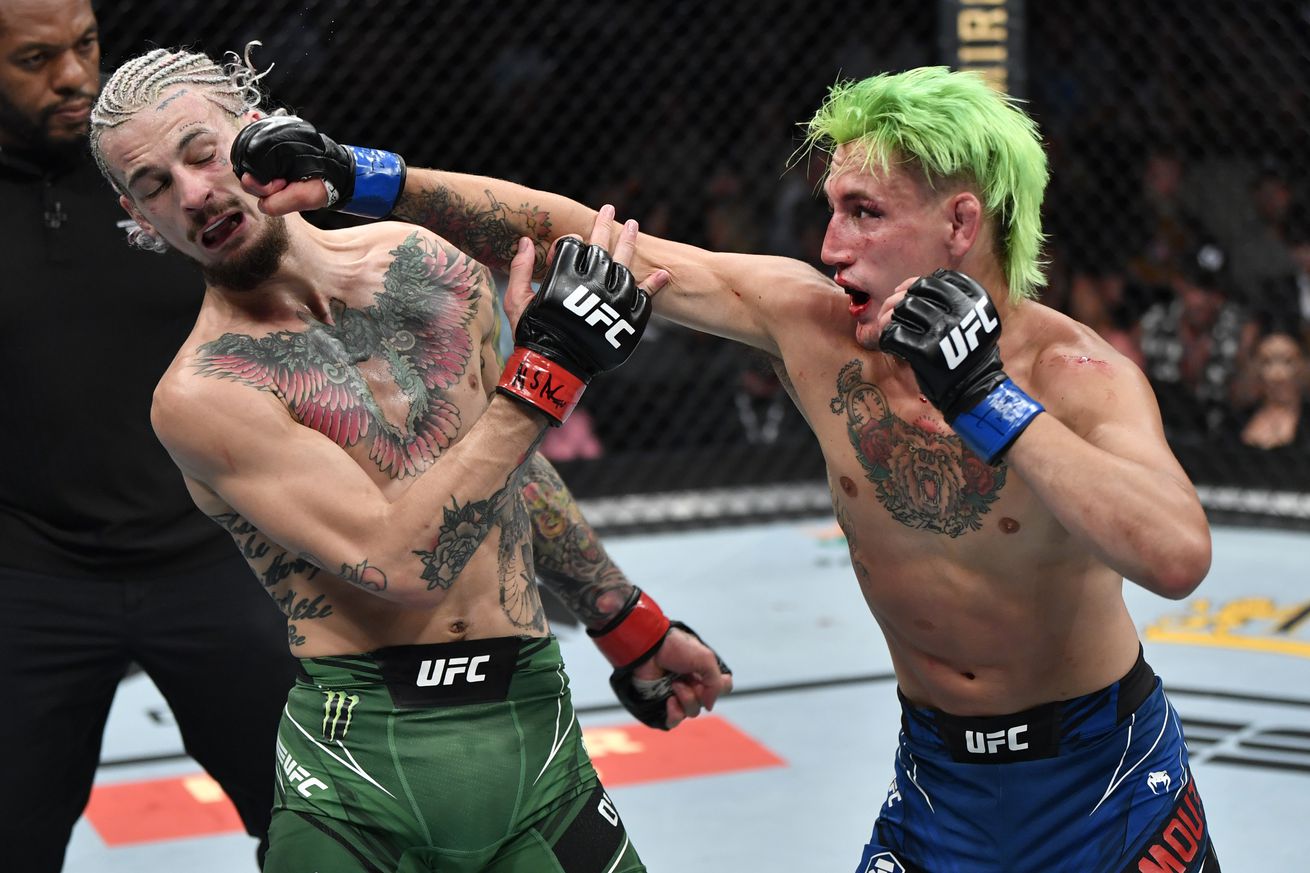 Kris Moutinho would have liked a little more time to scrap with Sean O’Malley.

That may sound surprising given the one-sided nature of their bantamweight contest at UFC 264 this past Saturday, but from Moutinho’s perspective, the complexion of the bout was changing in the final round. Moutinho was the aggressor throughout the contest even though it was clear that O’Malley was dominating the fight and he pressed forward until referee Herb Dean waved off the bout with less than 30 seconds remaining and Moutinho still on his feet.

Moutinho spoke to MMA Fighting about his memorable UFC debut and the shift that he felt in the final five minutes.

“I think, again, it was my fault, I wasn’t adding any feints, I was standing there, I wasn’t moving my head off the center line, I was just getting punched in the face. I didn’t make it as much of a competitive fight as it could have been. I can’t go back in time, I can’t change things. I understand what happened. I understand what I have to improve on and and the next few months is going to be nothing but improvement.”

Moutinho was only on the UFC 264 card as a short-notice replacement for an injured Louis Smolka. He entered Saturday’s fight as a massive underdog and early on it looked like fans would see the fast finish that most of them were expecting.

However, Moutinho made it out of the first round and he doesn’t think that he was in any serious danger of being stopped at any point in the fight.

“It wasn’t that bad,” Moutinho said of the first-round knockdown. “It was a drop. He got me, it was flash one. He got me, but I’ve been hit a lot harder and I’ve been dropped a lot worse. He’s a very talented fighter. It was good timing, but a lot of it was my fault. I wasn’t setting up my strikes, I wasn’t feinting, I wasn’t doing anything, I was kind of just bar brawling. I turned this into a hockey fight. I was just trying to swing and it was what I felt in my head. I just wanted to go, I just wanted to hit him.

“But this is a fight. I had to set up strikes, I have to feint, I have to get into my range where I can land strikes. As the fight was going, one of us was tired, one of us wasn’t. It wasn’t the kid getting punched a lot, so you guys tell me what you thought.”

The entertaining affair won both fighters the Fight of the Night award a pair of $75,000 bonus checks. O’Malley showed off his precise striking and broke out a few exaggerated taunts, including miming dribbling a basketball between his legs, while Moutinho just laughed it off and fired back trash talk whenever O’Malley got chatty in the cage.

Thanks to his spirited performance, Moutinho has seen his social media following grow exponentially since Saturday and it’s not unrealistic to say that he was one of the most talked-about fighters from the UFC 246 lineup. A day after, Moutinho shared a South Park-themed meme paying tribute to his debut, describing it as “hilarious.”

As much as he enjoyed the entire fight week experience, one thing Moutinho won’t do is gain any satisfaction from his hard-fought loss. He stops short of claiming any sort of moral victory, instead focusing on being grateful to his inner circle and focusing on his next UFC opportunity.

“Win lose or draw, I told everybody what I was gonna do and I did it,” Moutinho said. “Again, I’m always gonna be a sore loser. I never like to lose, I never like to look at it like that. I’m just happy that I got to go out there and I put a good account for myself and my team, the people that I really care about, and my small circle that got me to this point.”