Retro Robbery Review: Al Iaquinta vs. Jorge Masvidal at UFC Fairfax
This topic has been deleted. Only users with topic management privileges can see it.
F
F
fightgal Reply Quote 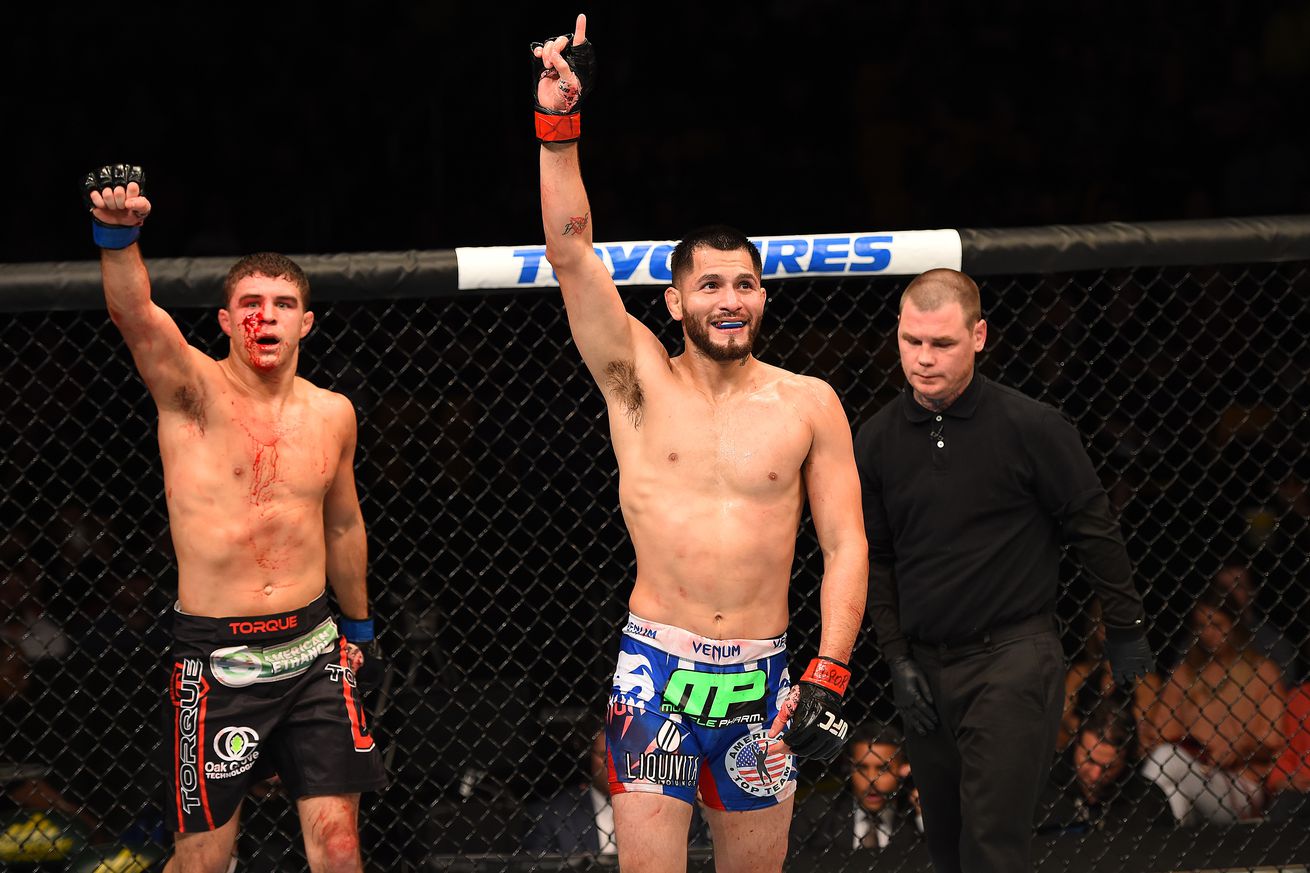 Few things infuriate MMA fans more than a fight being scored incorrectly, though the term “robbery” tends to be thrown around carelessly and is often steeped in bias. With Robbery Review, we’ll take a look back at controversial fights and determine whether the judges were rightly criticized for their decision or if pundits need to examine their own knee-jerk reactions.

This weekend marked the six-year anniversary of “Raging Al” introducing himself to the world.

Al Iaquinta was already making name for himself as one to watch in the UFC’s lightweight division after finishing as a finalist on The Ultimate Fighter 15 and then winning six of his next seven bouts for the promotion. Even his moniker was beginning to grow in notoriety—Iaquinta admitted to trashing a hotel room like a rock star following a win over Joe Lauzon—but the full extent of his fury had yet to be seen.

That changed on April 4, 2015, when Iaquinta won a split decision against Jorge Masvidal at a UFC Fight Night in Fairfax, Va. When Iaquinta was announced as the victor, the crowd erupted in boos (check out Masvidal’s former friend Colby Covington’s reaction too) and when Jon Anik entered the cage to interview Iaquinta, a classic moment was made.

And then he left.

Iaquinta was right to be upset. After all, he’d just gone 15 hard minutes with a tough veteran in Masvidal and according to two judges, he did enough to win. But were the fine folks at Patriot Center (now EagleBank Arena) justified in their jeering?

What was the official result?

How did the fight go?

Masvidal said pre-fight that he wasn’t worried about Iaquinta’s striking and his in-cage approach certainly reflected those comments. The taller Masvidal dared Iaquinta to come at him and Iaquinta obliged, throwing hands at the slightest opening while Masvidal kept him at bay with his jab. When Masvidal opened up, he landed the biggest shots of the opening round, scoring with a jumping knee, a body kick, and a sweet punch combination that forced Iaquinta to shoot in. Mavidal landed another knee followed by a right hand that stunned Iaquinta. Round one ended with Masvidal on top throwing punches and elbows, though Iaquinta defended against the worst of it.

Rounds two and three were considerably closer. Iaquinta focused on volume and body work, while Masvidal continued to counter and look for a knockout blow. Masvidal’s left hook gave Iaquinta serious problems. That said, Iaquinta kept up the pressure, and though he failed to score a single takedown, the threat of it allowed him to sneak in a few hard punches of his own. A cut under his right eye had Iaquinta wearing a partial crimson mask for much of the fight.

Iaquinta snuck in a few good right hands to the head, which complimented the strikes he was landing to Masvidal’s leg and body. Commentator Brian Stann noted at one point that Masvidal switched to a southpaw stance, possibly to avoid further damage to his lead leg. The final two minutes saw Iaquinta land a right, then go for a scissor sweep that Masvidal easily avoided. Masvidal caught Iaquinta off-balance with a left hook, but Iaquinta wasn’t too hurt, it just looked bad. Iaquinta found a home for a couple more right hands, Masvidal got him back with a loud kick to the body. With 30 seconds to go, Iaquinta chased a finish, while Masvidal stuck to backing up and countering until the final buzzer sounded.

What did the judges say?

The first round was an easy one to score, so it was the second and third rounds that Tirelli and Urso gave to Iaquinta.

What did the numbers say?

Even looking at volume, the edge goes to Masvidal. Despite how it looked at first glance, Masvidal actually ended up throwing out more strikes in every round and in total he attempted 173 strikes to Iaquinta’s 153.

Masvidal had a big advantage in head strikes, 62-18, while the body work was essentially a tie (11-10, Iaquinta) and the leg work was convincingly in favor of Iaquinta (26-11).

No knockdowns or takedowns were scored in the fight.

On another statistical note, this was one of many Masvidal fights that went to the judges during this stretch of his career. From April 2010 to November 2017, Masvidal had 16 of 20 fights end in a decision. Don’t let all the “baptism” talk fool you, for a long time Masvidal was as much of a decisionator as Dominick Cruz or Georges St-Pierre.

What did the media say?

The media overwhelmingly scored the fight got Masvidal. Only two media scorers on MMA Decisions had it 29-28 Iaquinta, while 13 had Masvidal as the winner. Five outlets had it 30-27 for Masvidal, with Bloody Elbow going as far as to give Masvidal a 30-26 score.

What did the people say?

Taking into account the top three results that had Masvidal winning in some fashion, 64.6 percent of fans on MMA Decisions had it for Masvidal, with 30-27 Masvidal the most popular verdict at 32.4 percent.

Iaquinta has a fair amount of support, with 20.9 percent scoring the fight 29-28 in his favor.

Going round-by-round, Masvidal took the second comfortably with 63.9 percent of the vote, but the final round was razor thin. In fact, 49.2 percent gave the last round to Iaquinta, while 45.1 percent saw it for Masvidal. It’s that close.

Here’s what some of their peers had to say about the decision (and Iaquinta’s post-fight antics) at the time:

I'm a huge Iaquinta fan, but you gotta stay cool and smile in those situations. Same with Masvidal. I scored it for Al, but it was close.

Ahh @ALIAQUINTA Raging Al losing his shit! Such a mild tempered dude outside the cage (and hotel room).

Masvidal threw it away in the third. That's what happens. It was his fight to lose

Masvidal didn't do shit after the first round. He fucked that money up. #Respect for Al. Fuck the crowd

Great ending and great speech by @ALIAQUINTA, fuck the haters, it was a close fight #UFCFairfax

Al Iaquinta just G-ed. Dude fought his butt off no matter what the judges say. You tell Em bro !!! #UFCFairfax

@ALIAQUINTA should be mad. It's the judges not him so why boo him. @GamebredFighter did win that fight though. @ufc #judging #baddecision

How??? I feel bad for @GamebredFighter controlled the fight. Crisp and clean.

How did I score it?

Re-watching the fight, and having the luxury of being able to replay a few key sequences, I strongly feel that Masvidal was the superior striker here and the numbers back that up. He landed the most effective strikes of the fight, dictated where the action went for the most part, and in this particular bout I weigh his head strikes more than I do Iaquinta’s body and leg strikes.

Did Masvidal let up on the gas a little? It’s hard to say, because he was countering well enough that there was really no reason for him to force anything (the judges apparently disagreed). One could argue that he may have been waiting to long to land that one perfect shot, but it’s not like he wasn’t scoring in between his more impactful blows.

It wasn’t a blowout, but I gave all three rounds to Masvidal.

Was it a robbery?

Iaquinta may have Diego Sanchez’d his way to a victory here.

Raging Al fought hard and didn’t let Masvidal just pick him apart from distance, but he also walked into a lot of Masvidal’s offense. That, to me, doesn’t suggest that he was in control of the fight even if it looked like he was the aggressor. Credit to Iaquinta for his toughness, but there’s really just no hard evidence that Masvidal let up at all. Backing up does not automatically equal losing.

After the fight, Iaquinta claimed that judge Crosby had a major conflict of interest as he allegedly was embroiled in an ongoing feud with Iaquinta and the Serra-Longo team. According to Iaquinta, Crosby had a personal grudge with him in particular due to Iaquinta declining an offer to work with Crosby—a stunt coordinator—on a film project.

I don’t know about all that, but I can say that Crosby’s card is defensible. The eye test showed Masvidal landing the harder strikes (it’s possible that Iaquinta was just off-balance on some occasions, making the hits look worse than they were) and the stats are even more convincing. Add in the fact that several members of the media (including myself now) saw this as a shutout for Masvidal and I’m comfortable going on record as saying that Masvidal should have one more win on his record.

Robbery. Now please hide me if you see Iaquinta come around.