Aleksandar Rakic says he should be next for UFC champ Jan Blachowicz after ‘easy win’ over Thiago Santos
This topic has been deleted. Only users with topic management privileges can see it.
F
F
fightgal Reply Quote 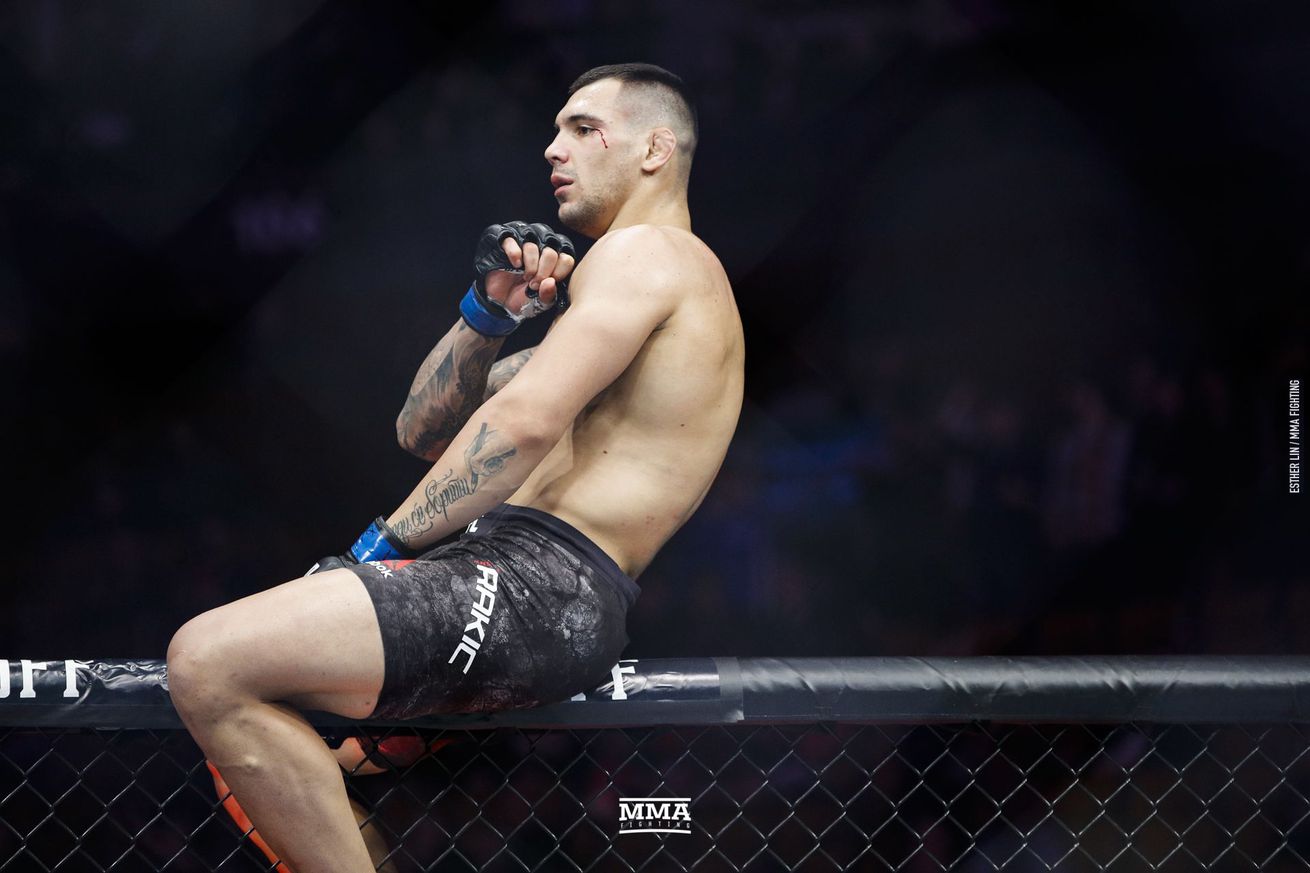 Aleksandar Rakic is coming off back-to-back wins over Thiago Santos and Anthony Smith in the UFC | Esther Lin, MMA Fighting

Aleksandar Rakic is making his case for a title fight with UFC light heavyweight champion Jan Blachowicz next.

The 29-year-old talent defeated Thiago Santos via decision in his most recent octagon appearance to improve to 6-1 in the company—7-0, if you ask him—and he believes that should be enough to cement his spot as the No. 1 contender in the 205-pound class.

“I think I deserve the title shot,” Rakic said in an interview with MMA Fighting. “If you see realistically I am 7-0 in the UFC, this one loss against Volkan [Oezdemir] wasn’t a loss, and Thiago was the third former title challenger in a row, and I beat all of them. So, who else, you know? Who else?”

The other person in this race for a fight with Blachowicz is Glover Teixeira, who also defeated Santos and Anthony Smith in his most recent UFC bouts, capping off a five-fight winning streak dating back to 2019. Yet, Rakic believes he should jump over Teixeira.

“Why not?” he said. “I’m young, I’m hungry and motivated, and I’m here to stay. I told Dana White after the fight, ‘I’m gonna be your new guy and new face of the light heavyweight division.’ I’m gonna dominate the division for long and you’re gonna to see every fight a better Aleksandar Rakic.”

Teixeira and Blachowicz seem to agree that the Brazilian should get the next crack at the gold, though, and Rakic would happily take the call to be a backup fighter for that championship duel if that’s the direction the UFC decides to go “because we live now in this era where COVID and everything can happen and everything can change in one second.”

“I would love to be the backup fighter,” he said. “It’s a big opportunity for me. But, if not, I would love to fight for the title. I think I proved to everyone that I’m deserving. I’m unbeaten in the UFC and it’s just a matter of time. But if the UFC comes to me with a backup fight for Glover and Jan, yes, I would jump in, of course.”

Rakic jumped to No. 2 in the UFC’s official light heavyweight ranking with a win over “Marreta” in March, a victory with which he is satisfied even though he expected “a much more aggressive Thiago Santos, like he used to be in his last fights.”

“I was training for that but he didn’t come out like usual,” Rakic said. “I think I neutralized his strength with my distance and the constant pressure forward, I didn’t let him do his own thing. I picked my shots and that was enough to win the fight. If he came forward more or [was] more aggressive, the fight would be going different, you know, and I would probably knock him out or take him down and submit him. But he didn’t rush so many times forward and I picked my shots. I didn’t expect such a passive Thiago Santos but, anyways, a victory is a victory and I’m the No. 2 lightweight contender for a reason.”

“The focus was on an aggressive guy,” he continued. “I respect Thiago and I think you can respect your opponent before the fight and after the fight, but, in the cage or in the octagon, I’m not gonna respect you. And I think his problem was that maybe he was respecting me in the cage. That’s the reason he let me do my thing. It was for me, like, easy victory, because I showed maybe 60 percent of my skills.

“I was in the best shape of my life. I do every scenario in the fight. I trained so hard and I was ready for everything. But, you know, you need always two guys to dance, you know? But, anyways, like I said, a victory is a victory and I’m very happy about this. This is one step closer to the belt that I want to.”

Rakic won decisions over Santos and Smith, while Teixeira finished both. In a world where “the UFC and people always wants finishes,” Rakic made sure to follow his game plan and didn’t make the same mistake Blachowicz did against Santos in the past, when he got knocked out after “rushing forward.”

“I don’t want to force the finish because if I force the finish it can go the other way and I can get knocked out,” he said. “I worked so hard to be there right now in this spot and I didn’t want to force so much, you know? I want to pick the clean shot and the knockout will come by himself. If you force it, you cannot get it. We are all top athletes in this division and one punch can change everything, and I prove to the division that I can knock people out as well.”