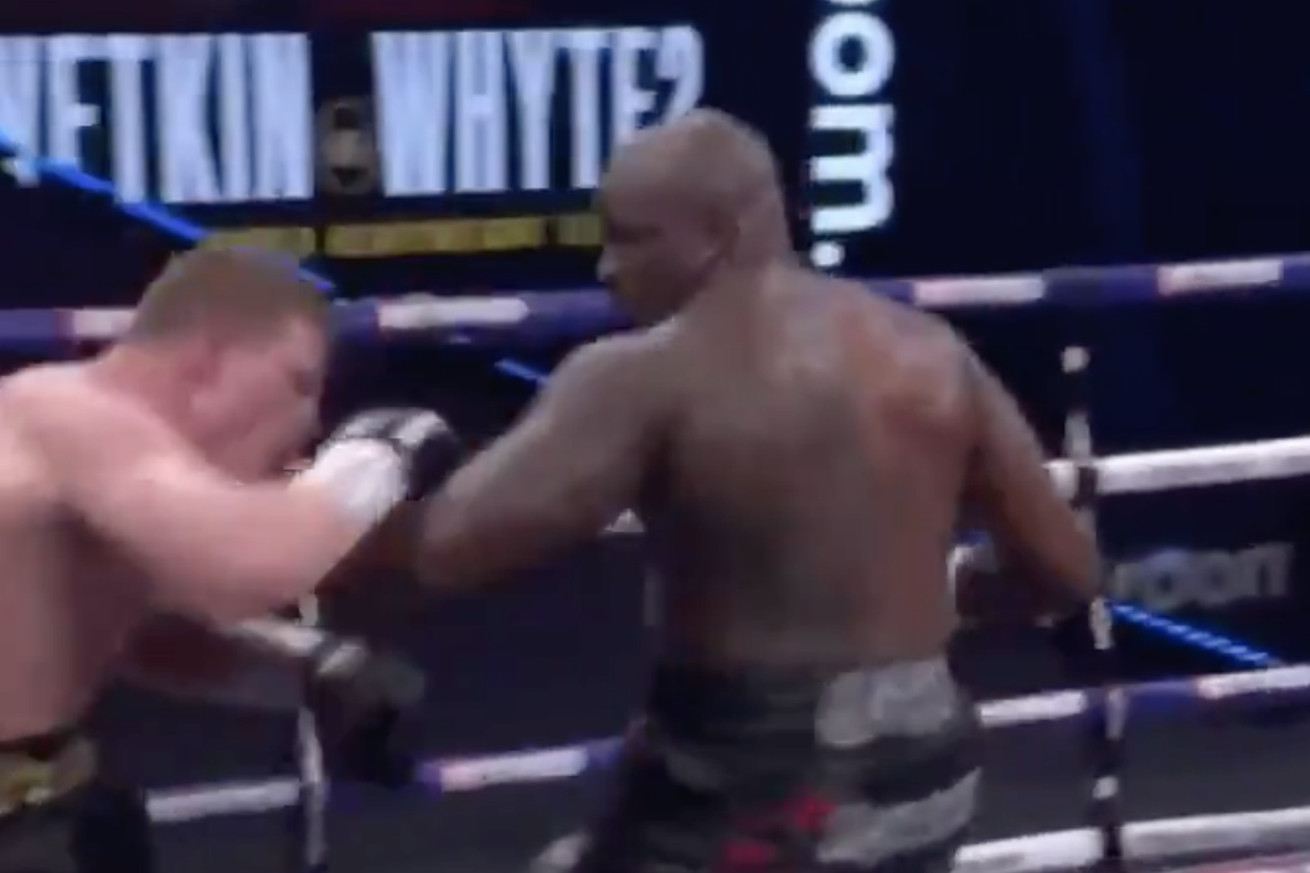 Watch Alexander Povetkin vs. Dillian Whyte 2 full fight video highlights from the Rumble On The Rock main event above, courtesy of DAZN.

Povetkin vs. Whyte 2 took place March 27 at the Europa Point Sports Complex in Gibraltar. The heavyweight main event was a rematch from their first fight this past August that Povetkin won by fifth-round TKO. The fight aired live on DAZN pay-per-view. Catch more video highlights below.

Povetkin makes his way to the ring.

For more on Alexander Povetkin vs. Dillian Whyte, check out the live blog from Bad Left Hook below.

Povetkin backed down early! Povetkin has no legs. These are glacning shots. Whyte just bombing wild shots at him and Povetkin hanging on now. Whyte shoves him away. Whyte reaching the jab out, throws a right to the body. Povetkin shoots in with a lead right but slow. Povetkin eats a solid shot. They’re not “feeling it out,” that’s for sure. Whyte with a little counter right and slips out after. Body shot from Whyte.

It’s Whyte on the front foot, even when he’s not throwing a lot. He’s sticking that jab out occasionally, looking to read Povetkin. It seems Whyte may really want to get a counter shot, trying to bait Povetkin in. Whyte with a right hand upstairs. Povetkin comes in with a left, Whyte throws a hook in return. Povetkin starting to lead a bit more, coming in with hooks and lead rights, not landing clean but he’s alive in there. Povetkin with another lead right, again not flush but they’re getting in there. Close round, shade to Whyte.

Whyte’s jab could really be a huge weapon here if he’d use it more consistently. Whyte slips on a logo in the corner, no knockdown. HARD right hand from Whyte caught Povetkin and the veteran backs down! He’s hurt. Whyte not pressing hard, though, he knows Povetkin is dangerous and was waiting for an opening there. Smart work from Whyte, I mean we know what happened last time. Whyte jabbing. Povetkin lunges in with a hook, doesn’t get there. Jab again from Whyte, and again. Right hand from Whyte just glances, then another. He goes for a lead right, doesn’t get it.

Whyte tags him again to start the round, now has him reeling! This time Whyte’s looking to go for it, and Povetkin is right there looking for the counter shot! Now they settle it back down. Povetkin still a bit unsteady, and he’s huffing air at moments, too. When Whyte sticks on the jab, it’s landing and working. Povetkin just not reacting, head not moving. Povetkin lunging, missing, and caught with a thudding little right hand. Good right knocks Povetkin into the ropes, caught again, and POVETKIN IS DOWN ON A THIRD SHOT! IT’S OVER! TOWEL IS IN!