Video: Cory Sandhagen would fight T.J. Dillashaw next to keep ex-champ from stealing title shot
This topic has been deleted. Only users with topic management privileges can see it.
F
F
fightgal Reply Quote 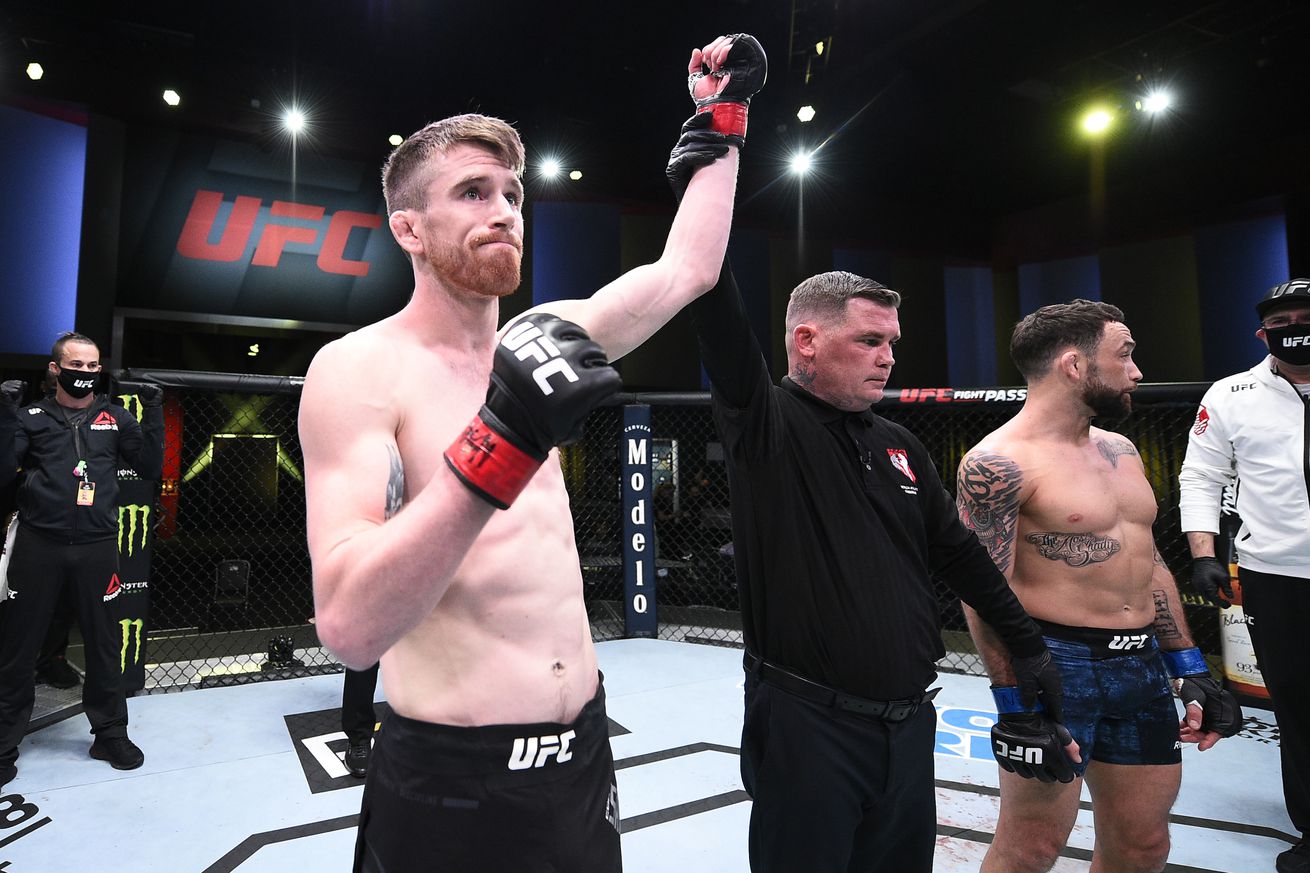 A jaw-dropping 28-second knockout against a future UFC Hall of Famer in Frankie Edgar should be more than enough for Cory Sandhagen to earn a bantamweight title shot. Still, he can’t help but see all the potential obstacles standing in his way.

This past Saturday night, the 28-year-old contender picked up one of the most devastating finishes in recent memory with a flying knee that put Edgar down and out on the canvas in the first round. Afterward, Sandhagen wasted no time calling for a shot at gold.

On paper, Sandhagen has done more than enough to stand firm as the true No. 1 contender at bantamweight. His case is bolstered even more by a spectacular spinning heel kick finish of former title contender Marlon Moraes in his previous outing. But he also knows the return of former champion T.J. Dillashaw could serve as a roadblock to his title aspirations.

Dillashaw was just recently cleared to return to action following a two-year suspension handed down by the U.S. Anti-Doping Agency after he tested positive for EPO following a loss to Henry Cejudo in 2019. That suspension forced Dillashaw to relinquish his bantamweight title, but he’s stated in several interviews that he was targeting a championship fight – and the promotion was planning one – as soon as he returned.

Because Dillashaw is a former champion with a sizable following, Sandhagen can’t help but wonder if that might keep him from fighting for the title next. He has a solution in mind if that’s the UFC’s plan.

“Of course there’s concern,” Sandhagen told MMA Fighting on Wednesday. “Cause the UFC, it’s a business and they operate like a business. T.J. is a much bigger name than I am. He’ll probably get more sales for stuff maybe than I will, and that’s concerning for me.

“That being said, I don’t want them to just feed T.J. some really lackluster fight just so that they can say he’s coming off a win. If it comes down to it, I think I should be the next one fighting for the title, but if we need to eliminate another option, which is T.J., then I’ll fight T.J., and then I’ll fight for the title, too.”

Prior to his fight against Edgar being booked, Sandhagen actually had called for Dillashaw as his next opponent, but the UFC never came to him with an offer.

While Dillashaw has plenty of credentials to back up his status as a threat to the bantamweight title, the two-year doping suspension still looms overhead. Sandhagen believes it would be a “lame” decision to either hand the ex-champ an immediate shot at the belt, or a fight against a lesser opponent to technically earn the opportunity.

Instead, Sandhagen would set aside his own potential title shot and face Dillashaw next in order to cement his position as the true No. 1 contender at 135 pounds.

“If it’s not the title shot, it should be me and T.J. next,” Sandhagen said. “This thing is just about war. If it means I have to fight in order for them to not get an easy win over someone or whatever, absolutely I would do that. I would love to take out as many people as I need to before I even fight for the title if I need to do that, then I’ll do that, too.

“If I need to scratch off every name off the top of the list until they’re forced to give me the title shot, I’ll do that, too. But I don’t think that the UFC will do that.”

Just because he’s willing to face Dillashaw doesn’t mean that’s the ideal scenario. Wins over Edgar and Moraes should put Sandhagen into position to challenge the winner of the upcoming bantamweight title fight between reigning champion Petr Yan and Aljamain Sterling.

He obviously hopes the UFC agrees.

“I think that I earned it but if I fight TJ, absolutely will do that,” Sandhagen said. “I think that will probably come with a new contract, too, which would be nice and yeah, more than willing to do that.

“But like you said and like I’m saying, [Dillashaw] shouldn’t even really be in the conversation, and I’m definitely next.”