Joanne Calderwood open to Lauren Murphy fight, then winner of Valentina Shevchenko vs. Jessica Andrade
This topic has been deleted. Only users with topic management privileges can see it.
F
F
fightgal Reply Quote 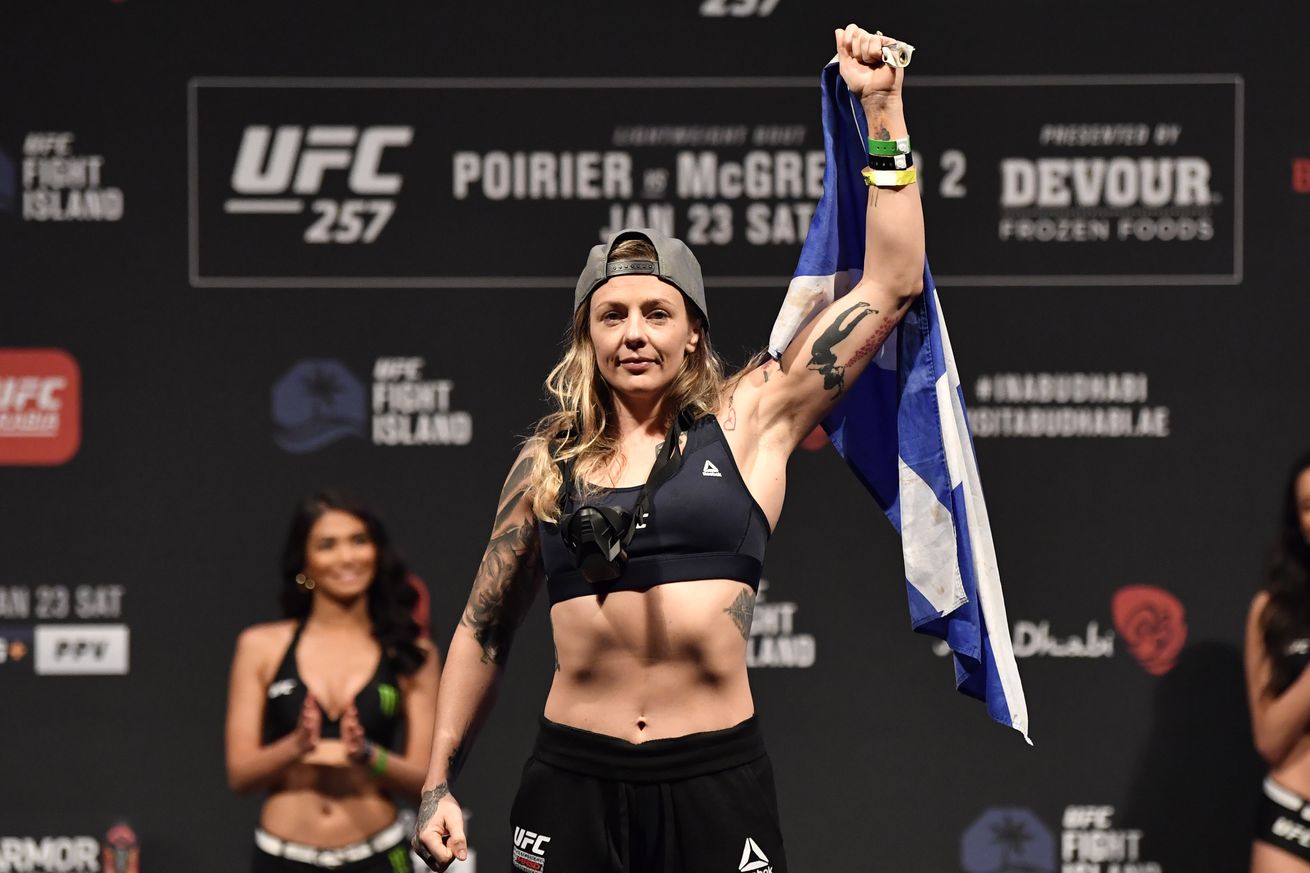 Joanne Calderwood’s path to a title was derailed in 2020, but she already sees how she can get back on the championship track.

Some of the work has already been done. Calderwood scored a key victory over Jessica Eye on the main card of UFC 257 this past month, turning in a strong showing after losing a fight with flyweight champion Valentina Shevchenko this past June when Shevchenko withdrew due to an injury. Calderwood lost the title shot when she signed up as a short-notice replacement to fight Jennifer Maia in August and ended up on the wrong end of a first-round armbar submission.

The win over Eye, a one-time title challenger, keeps Calderwood near the top of the contenders’ rankings, alongside such names as Jessica Andrade, Katlyn Chookagian, Cynthia Calvillo, Maia, and Lauren Murphy. It’s the latter of those names that was raised as a possibility for Calderwood’s next opponent on a recent episode of What The Heck, and “JoJo” lit up when told Murphy has been targeting her for a matchup.

“For sure, me and Lauren fighting for the winner of Jessica and Valentina, I think that makes perfect sense,” Calderwood added. “Let’s hope the UFC comes along and get it booked straight away.”

As of this moment, Shevchenko’s next title defense has not been officially scheduled, though Andrade has become a leading candidate after recording a spectacular first-round TKO of recent title challenger Katlyn Chookagian in October. Should that be the case, Calderwood vs. Murphy could make sense as a No. 1 contender’s bout.

For Calderwood, the win over Eye was a chance to put the Maia loss behind her, and now that her career is back on a positive swing, she can look back on the missed opportunity to fight Shevchenko with rose-colored glasses.

She recalled how difficult it was to prepare for Shevchenko with COVID-19 restrictions emerging after the outbreak in March and now wonders if maybe the time wasn’t right for her to dethrone the reigning flyweight queen.

“It was so hard,” Calderwood said. “I was thinking, ‘Geez, I’m fighting the best girl in the division. One of the top girls in the world. And I’m training in my living room?’ And not [having] most of my team around me. It was so weird and there was a lot of pressure. I put a lot of pressure on myself for that and putting those spots into my mind, and then when it got delayed and that kind of thing, it didn’t help.

“So yeah, it probably was a blessing in disguise, but things are starting to change and you just have to make the most of the situation that you’re in and I feel like I would probably make better decisions now and just kind of go with it and not be so, ‘Oh geez, the world’s ending and you’re fighting for the biggest opportunity of your life.’”

Every fighter has had to adjust to gyms being shut down and new training situations, but Calderwood feels like she’s finally adapted and is thriving. The same could be said of Murphy, currently on a career-best four-fight UFC win streak.

Murphy is in the 11th year of her pro MMA career, while Calderwood in her ninth. “JoJo” sees a kindred spirit in her fellow veteran.

“I really love those stories, because everyone’s kind of got those stories, but it’s always good to see,” Calderwood said. “I feel like myself, I’m coming into my prime now and it’s like, oh man, if I knew this at the start of the UFC, I would probably already be champion and probably retired, but things happen for a reason and I’m glad that she’s coming out and she’s sure she’s feeling that she’s at her prime.

“I would look forward to fighting her. We both kind of have been up and down and I’m sure we’d have a great fight.”