Brendan Loughnane ‘persevered’ in year off, but promises ‘now’s my time’ as PFL prepares April return
This topic has been deleted. Only users with topic management privileges can see it.
F
F
fightgal Reply Quote 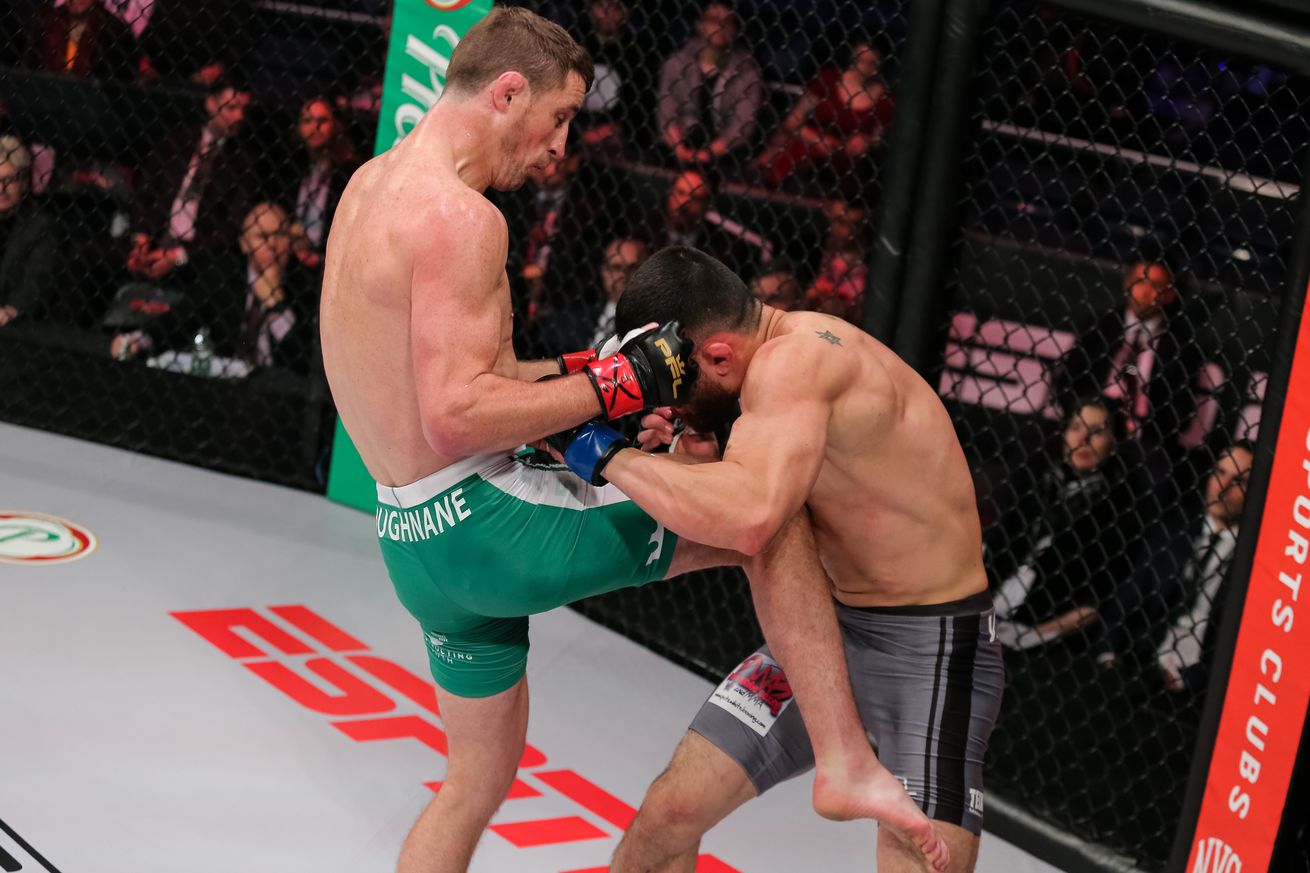 Brendan Loughnane had a year away from fighting, but that doesn’t mean he took any days off.

The featherweight prospect, who signed with the PFL in 2019, was gearing up for a run at the season title when the promotion decided to cancel all events in 2020 due to the ongoing coronavirus pandemic. At the time, Loughnane was deep into training camp in Thailand. He had a choice to go home and sulk about the fight cancellations, or continue the hard work that made him a high-value acquisition following an appearance on Dana White’s Contender Series.

“I trained every single day during the pandemic,” Loughnane told MMA Fighting from Dubai. “I was in Thailand for six months training out there, sparring Petr Yan, Rafael [Fiziev] helping them for their fights at Tiger Muay Thai. Then the show got called off around March time, so I stayed out in Thailand until July.

“[I] came home for a couple of weeks, realized absolutely nothing was happening in the U.K., and everything was going back into lockdown, so I came out here to Dubai. I’ve kind of followed wherever in the world is open, that’s where Brendan Loughnane is training!”

According to Loughnane, he actually went to Dubai for a bachelor party in September, but after realizing the opportunity to work with a number of high-level fighters traveling through the area, he just decided to stay indefinitely.

“Some good names have passed through the gym recently, Michael ‘Venom’ Page, [Alistair] Overeem, [Tai] Tuivasa is there now, all kinds of guys are passing through there,” Loughnane said. “A wealth of knowledge knocking around.

“With the U.K. being in lockdown and the U.S. not really letting me in right now, it’s probably the best place to train for me.”

Ideally, Loughnane would have already fought for a PFL championship, but that just wasn’t in the cards with the pandemic scrapping plans for the promotion. He did attempt to book a fight outside the PFL, as did several other competitors fighting for the promotion in the past year, but he admits options were quite limited.

“I was trying everything for every promotion,” Loughnane said. “Messaging them myself, Malki [Kawa], Abe [Kawa], First Round Management was working hard as well, but we just couldn’t manage to secure one. It was in a difficult spot because if you fight very tough fight outside of PFL and lose, my contract could be at stake. So we couldn’t really take tough fights, and who’s going to want to fight me for not much money on a smaller show?

“That was the kind of conundrum we was in. It made it real difficult to get a fight. I’m just so happy PFL is nearly back again.”

Loughnane admits the time off stunted some of the momentum he had started to build after his appearance on the Contender Series along with a pair of wins under the PFL banner after first signing with the promotion. That said, the British featherweight understands that nobody had it easy during the pandemic.

Now, he’s just anxious to make the most of his time with the PFL as the next season kicks off on April 23.

“Listen, one thing you can’t buy in MMA is time,” Loughnane said. “I was coming into my prime, I’m 30 years old, I was on a five fight win streak, I just had the thing with the Contender [Series], my name was hot, I was 2-0 in PFL and everything was going nicely. The ball was rolling my way and then a pandemic just hit in the middle of it.

“I’ve never had it easy in my career. Three losses in my career, all of them controversial, all at peak times in my career then getting on the Contender [Series] and had some bad luck there and then a bit of bad luck with PFL. But I’ve persevered. Now’s my time.”

Any and all of those potential matchups sound good to Loughnane as he begins his pursuit of a PFL championship and the $1 million grand prize that goes to the winner.

“Oh my god there’s some serious fights in PFL now,” Loughnane said. “You’ve got Bubba Jenkins, BRAVE champion, thrown into the mix. You’ve got Alex Gilpin, who did very well against Lance last year. You’ve got Shaymon Moraes in there now. You’ve got Jason Soares, 16-0, who was actually my coach on The Ultimate Fighter back in the day.

“There’s an absolute wealth of 15 or 16 fighters knocking around there. Put any of them in the UFC today and they’ll give anyone in the UFC a fight. We’re not talking about some ‘B’ or ‘C’ league. We’re talking about world class fighters. This is year is going to be really difficult but I feel like I’m coming into my prime and I’m ready for every single one of these guys.”