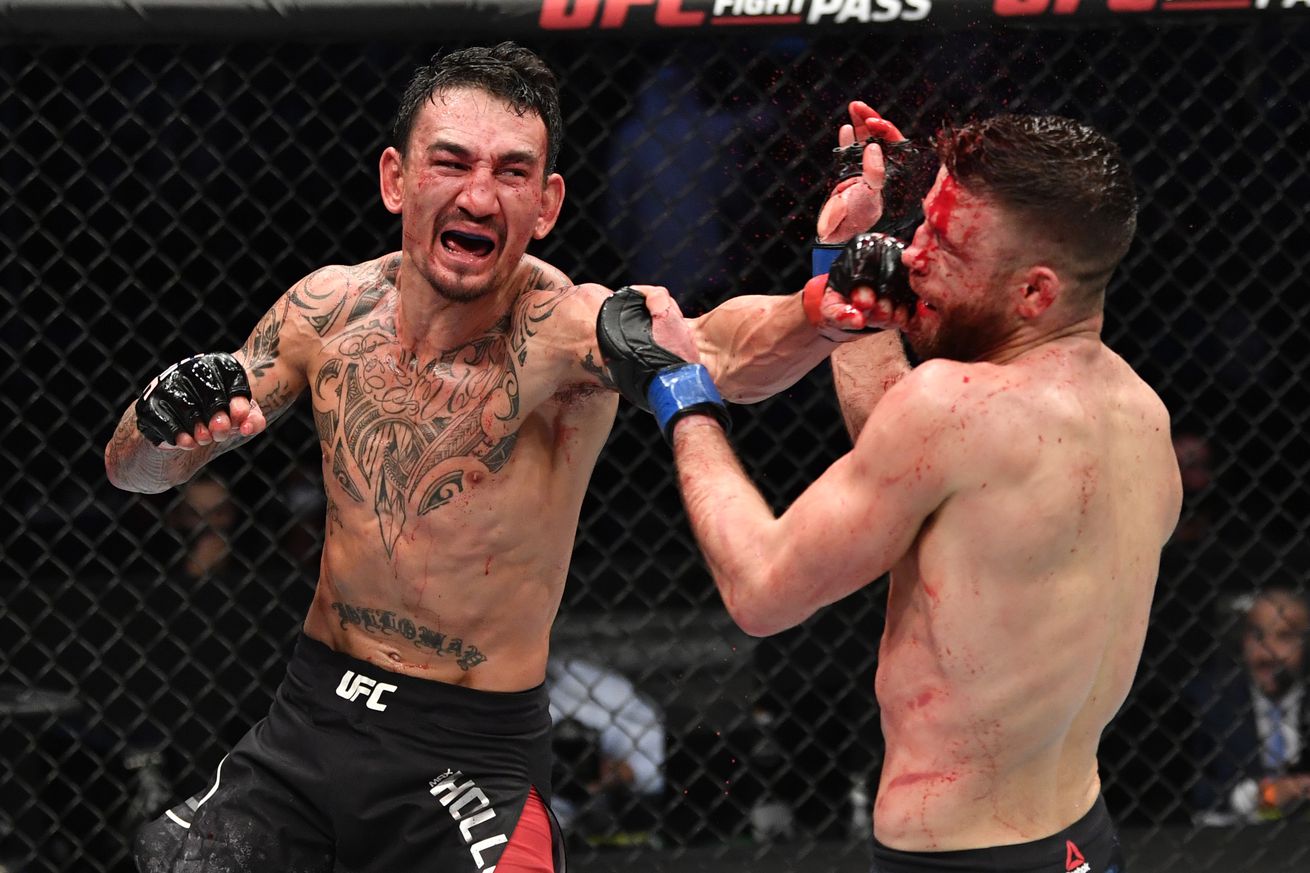 Holloway vs. Kattar took place Jan. 16 at the Etihad Arena in Abu Dhabi. Max Holloway (22-6) and Calvin Kattar (22-5) collided in a featherweight contest in the night’s co-main event, which aired live on ABC. Catch more video highlights below.

For more on Holloway vs. Kattar, check out the live blog by MMA Fighting’s Jed Meshew.

Round 1: Herb Dean is the third man in the cage for this main event.

Both men meet in the center of the cage and start feeling it other out. Not a ton of action to start but Kattar is clearly looking to land low kicks to Holloway’s lead leg to disrupt him. Holloway is pumping one-twos and landing them as well. 90 seconds in and Max is pushing the action and working body and head, meanwhile Kattar is looking for jobs and low kicks.

Holloway now getting in on the kicking game as well and he lands a sharp combo on Kattar. Max working the jab as well and putting punches on the body importantly. Kattar getting backed up and Max fires five shots into him. Holloway clearly has a speed advantage thus far and the body work is going to pay big dividends down the stretch.

Kattar lands a pair of good right hands that redden Max’s face but Max comes back with a four-shot combo. Holloway really pressing the action early, taking advantage of Kattar being a slow starter. Crisp right hand from Holloway gets Kattar’s attention. Kattar needs to land a big shot to get respect or else he’s just going to get picked apart all fight.

Max feints a right hand and lands a spinning back kick to the body that lands clean! Oof that looked like it hurt. Kattar trying to come back but eats another combo from the former champion before the round ends. Great start for Holloway.

Round 2: Kattar is historically a slow starter but he’s gonna need to find the gas soon because Max did everything he wanted to in the first round, and Kattar’s corner agrees, telling their fighter to stop backing up.

Max starts round two with the combos again though and Kattar is backing up. This is classic Max Holloway right now and Kattar seems perplexed with the speed of Holloway. Kattar’s jab looks like it’s traveling through molasses. Max still looking for body shots too and lands a bid left hook to the ribs. Kattar throws a big right to back Holloway off but Max slips and counters with a clean one-two. Kattar throws a kick and gets knocked off balance. 7 minutes in and Holloway has already landed 100 strikes. This is impressive.

Kattar’s face is showing the work from Max but now he’s at least moving off the cage better. Holloway really firing five and six punch combos that are paralyzing Kattar. Kattar’s corner asks him to fight angry and he surges forward and lands a shot but that just seems to inspire Holloway who lands a good combo. Kattar alrready looking a little frustrated and this may be the best Holloway has ever looked.

As I type that Max hurts Kattarr with a big elbow! Kattar is on the fence and covering up. Max is pouring it on and Kattar is moving but clearly hurt. Another elbow! Kattar is made of some serious stuff because Max is putting it on him and now Kattar is busted open. Anotherr big elbow from Holloway! And another! Kattar is still moving but he’s getting beaten up. Holloway lands a head kick with one second left that has Kattar running away! SAVED BY THE BELL!

Round 3: Kattar looks like he is somewhat recovered but his corner should be quick to throw in the towel here. He’s getting mangled and has had limited signs of effectiveness.

Holloway putting the pressure on to start the round and lands a good right hand early. Max backs Kattar up to the fence and unloads with a combo that hurts Kattar! Katttar clinches to recover and after a moment lands an elbow. They space out and Max charges in and Kattar lands a huge uppercut!! Holloway may be hurt from that! Kattar can’t follow up but Holloway is definitely being more wary now.

Holloway back in pursuit and lands another big combo. Big uppercut from Holloway lands and once again he’s in charge. Kattar against the fence and Max lands a knee to the body. Kattar throws a big right hand that backs Max up momentarily but only momentarily. Kattar shoots a double but Max shucks it off and he’s back on the hunt. Even in the moment when Max isn’t pasting Kattar, he’s still touching him with shots. Not a second for Kattar to breathe.

Kattar’s face is a bloody mask as Holloway keeps marching him down and peppering him. Kattar is landing a shot every now and then but whenever the does it only seems to make Max stronger. Max still working the body and marching Kattar to the fence. Now Max is styling out there, slipping shots from Kattar and letting him know that he did it! Max is vibing right now.

Round 4: Max Holloway should never spar again. He’s looking better than ever in this fight. Props to Kattar though who is still standing.

Holloway goes right back to work early, throwing body-head combos. Kattar doing a better job in this round of staying in the center of the cage though and it’s giving him more opportunity to land shots. Holloway still landing more but Kattar is showing signs of life. Now Max is backing him up and lands a big left hook to the ribs.

Big combo form Holloway has Kattar covering up! It was a body shot from Holloway and now he’s rifling hooks to the body! Kattar is against the fence and badly hurt! Elbows from Holloway now. Kattar is in full on survival mode! Kattar backs him off for a second but Max is just mowing him down. Body shots, elbows, Herb Dean is looking close! I have no idea how Kattar is still standing! Holloway keeps battering him with body shots and elbows. Kattar stumbling around and Herb Dean should stop this but Kattar won’t go down. This is getting hard to watch.

Max briefly backs off and now Kattar is trying to throw heat. He lands a shot but he can’t have much energy left. Max taking a breather as the time runs out on the round. Holloway lands a head kick but Kattar eats it. What an unbelievable round.

Round 5: Sending Kattar back out for the fifth round is a really bad decision but that’s what his corner is doing and Kattar at least looks like he has clear eyes.

Round 5 starts the same as the others, with Holloway marching Kattar down but Kattar is moving better. Nevermind, now Max has him against the fence again. Kattar has nothing new to offer and so he’s still getting pieced up with combos.

Holloway hurts Kattar with another shot and Kattar’s nose looks broken. His face is a mess and now Kattar switches stances. There is no reason for this fight to still be going on. Kattar lands maybe his best combo of the night but there isn’t enough salt in his punches at this point and Max still marching him down. Another spinning back kick from Max lands, and a high kick.

Holloway has thrown 600 strikes in this fight. That’s absolutely absurd. Kattar is too tough for his own good. Big right hand to the body from Holloway hurts Kattar! Now Max is flexing. He looked at the commentary team and said he’s the best boxer in the UFC. Now Kattar tries to land on Holloway who slips the shots and he’s just getting stunted on. Max is absolutely clowning Kattar now, screaming “The Freshman came to play” in reference to Kattar saying he was a senior in boxing. Holloway making a statement with this win and Kattar makes the final bell.