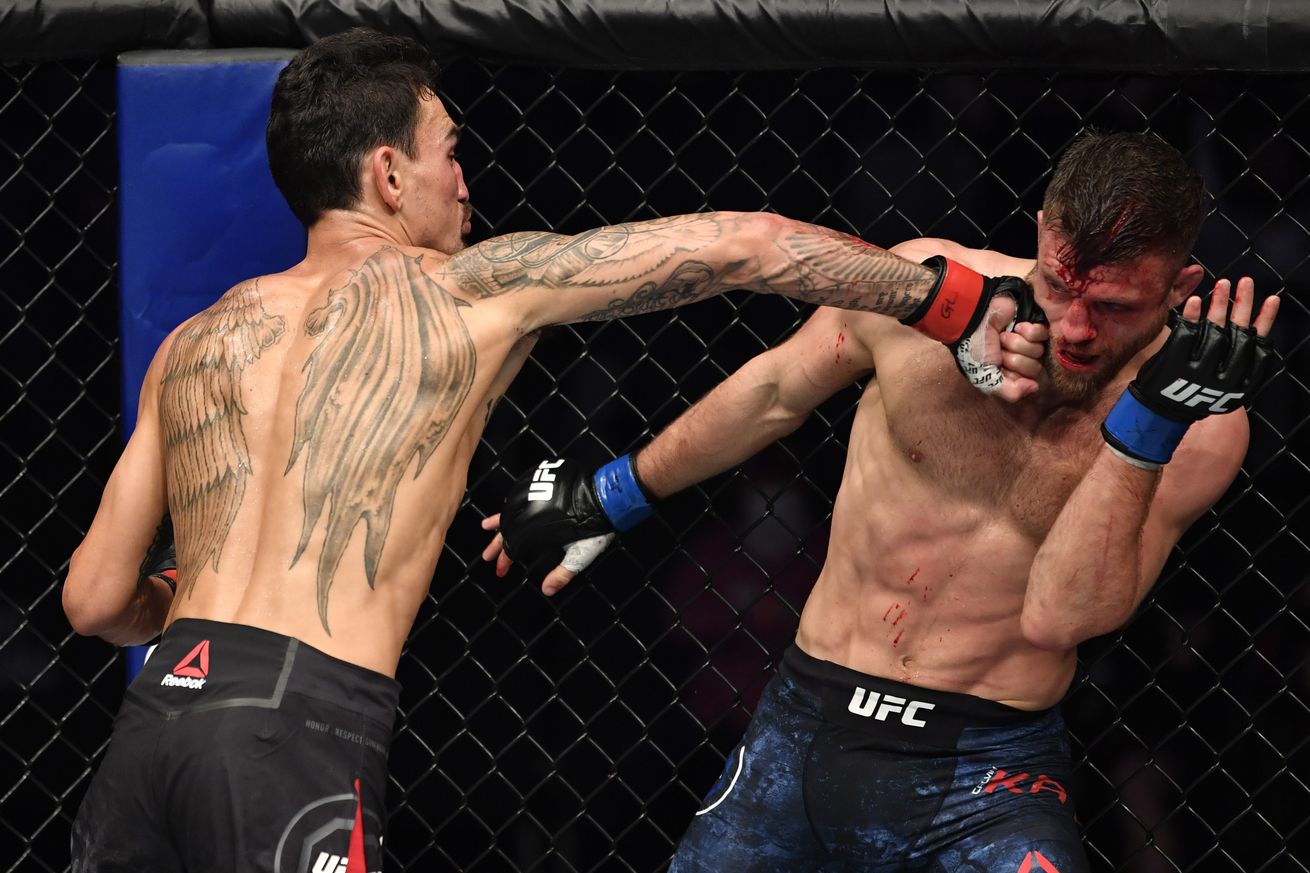 Max Holloway may not have the title any longer but he went a long way to prove he’s still the best featherweight in the sport with his performance at UFC Fight Island 7.

Over five rounds, Holloway put on a striking clinic while absolutely dominating Calvin Kattar from start to finish in their main event clash. If not for Kattar’s incredible toughness and durability, Holloway would have almost certainly earned a finish but instead he walked out of the octagon with a lopsided unanimous decision win.

The final scorecards read 50-43, 50-43 and 50-42 as Holloway returns to the win column after suffering a pair of heartbreaking losses to reigning featherweight king Alexander Volkanovski.

Filled with intensity after the fight, Holloway didn’t spent any time talking about his win but rather turned his attention to the UFC 257 main event taking place one week from Saturday.

“A big, big fight next week — Dustin Poirier versus Conor McGregor,” Holloway shouted to the crowd at Etihad Arena. “Guess what? Your boy’s staying all the way through the week, if anything happens in this sport, somebody drops off, Dana knows my number, he can hit me up.”

Before he started looking ahead, Holloway managed to unleash arguably one of his best performances to date while busting up Kattar from head to toe over five rounds.

Well known for his volume striking, Holloway started incredibly fast in the first round as the former champion was throwing three and four punch combinations while also mixing in a series of blistering kicks. Holloway was mixing up his strikes, going to the head and the body as Kattar seemed to struggle in his attempt to keep up during the exchanges.

Katter did manage to fire off a couple of stiff right hands that caught Holloway’s attention but the New England native was constantly eating punches that kept him on his back foot.

The offensive minded Holloway was just overwhelming as each minute ticked away in the fight as he came after Kattar with such suffocating pressure. Holloway was just relentless as he dug to the body with punches and then went back up to the head with a variety of strikes.

Late in the second round, Holloway really started pouring on the punishment including a pair of brutal elbow strikes that opened a cut on Kattar’s head and nearly had him out of the feet. Somehow, Kattar survived but he was the walking wounded with Holloway looking to pounce for the kill.

Holloway’s confidence just continued to flourish while putting on a show round after round against Kattar, who was resigned to the big, one punch counters in an attempt to get back into the fight. Kattar did manage to connect on Holloway’s chin a few times while trying to employ his fight finishing power but the Hawaiian legend just walked forward as if nothing bothered him.

With the fourth round winding down, Holloway began to really push the pace while absolutely battering Kattar with shots to the body and elbows to the head. There were several moments where it appeared Kattar was only still standing because he was pushed against the cage but he refused to go down or give up while still winging punches whenever he was given a moment to breathe.

Things that cannot be questioned:

It was more of the same during the final five minutes with Holloway smiling and having fun while trading shots with Kattar, who had a mashed nose and blood streaming down his face as he left everything in the cage in order to survive to the final horn.

“I ain’t gonna take a knee for anybody,” Kattar said following the fight. “If you’re not a Max Holloway fan, you’re a hater.”

While Kattar’s toughness should be commended, it was Holloway’s night from start to finish as he looked better than ever in his first non-title fight since 2016.

Regardless of two losses to the current champion, it’s going to be awfully hard to deny Holloway another shot at the gold considering how he dismantled Kattar over five rounds to cement his spot as the No. 1 featherweight contender in the world.