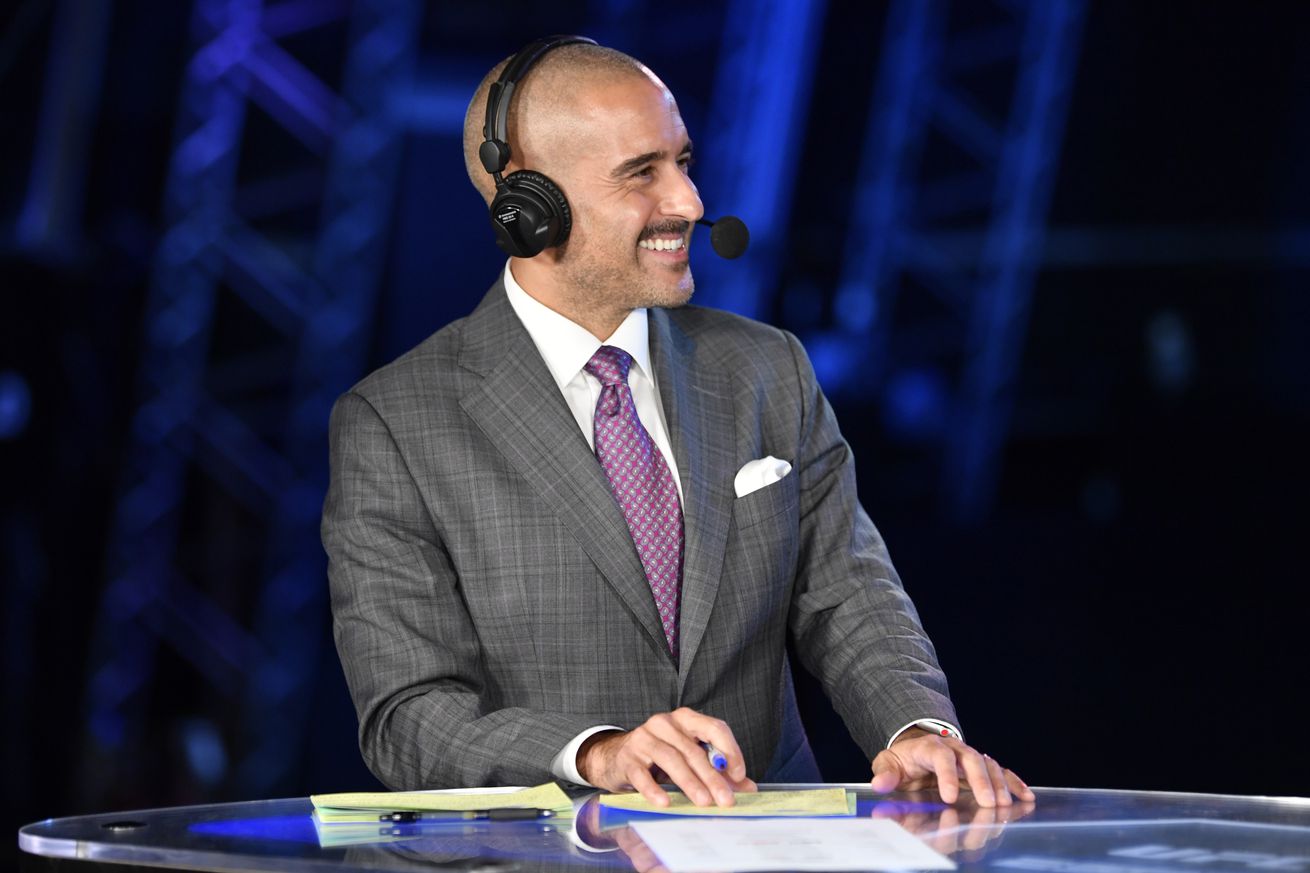 After a short hiatus, the UFC returns to action this weekend and debuts on a new network.

UFC Fight Island 7 takes place this Saturday in Abu Dhabi featuring a pivotal main event at 145 pounds between former champion Max Holloway and surging contender Calvin Kattar. The event will stream on ESPN+, but will also serve as the first promotional broadcast to air on ABC.

With the exciting news of the UFC returning to network television for the first time since their deal with FOX came to a close at the end of 2018, head play-by-play voice Jon Anik’s trip back to Abu Dhabi comes a week earlier. Being a consummate professional, Anik is thrilled by the opportunity, but his focus remains the same as always.

“It’s exciting, and I try to steer clear of the ratings conversation because I need to stay in my lane and focus on what I do,” Anik told MMA Fighting while appearing on What the Heck. “It is nice when we do a big number but that can’t be my focus.

“But it’s huge. I actually wasn’t even in line to call this show and now I’m thankful to be getting the opportunity. But it’s big, man, and I think sometimes we’re so internally invested in it that, to me, a show that’s wall-to-wall on UFC Fight Pass feels very similar to a UFC Fight Night on ABC. But it’s exciting when I get text messages from friends that I haven’t heard from that are mainstream sports fans telling me they read an article that the UFC is going to be on ABC. So that gives me a lens into which I’m not usually looking and maybe suggest that it’s a bigger deal than I have thought it is. We’re excited.”

For the first time since December 2016, Holloway enters the octagon in a non-title fight and does so on the heels of a losing streak for the first time in over seven years. “Blessed” dropped his featherweight title via unanimous decision to Alexander Volkanovski at UFC 245 and then came up short in the rematch seven months later at UFC 251 in one of most heavily contested decisions in recent memory.

He takes on Kattar who made a big move forward in 2020, winning both of his appearances. “The Boston Finisher” lived up to his moniker at UFC 249 when he put away Jeremy Stephens in the second round before winning a unanimous decision over Dan Ige in the main event at July’s UFC on ESPN 13 event.

From a competitive standpoint, Anik believes fans couldn’t ask for much better ahead of an important featherweight scrap with several built-in storylines.

“It’s probably criminal that a lot of us got through our [end of the year] awards formalities without dropping the name Calvin Kattar,” Anik said. “It’s a huge fight, and I kind of feel like the guy after Holloway-Volkanovski 2 that said, ‘Man, I hate to be Max Holloway’s next opponent because he’s gonna put it on somebody’ after getting hosed, largely. I hate to throw out that robbery term but I definitely walked away from those 25 minutes thinking that Max Holloway had regained his title. Fights are big swings to begin with and to lose a little fight like that, and all of a sudden you’re not a two-time UFC featherweight champion and you’re not defending your belt, it’s almost like walking back into your new life.

“Massively disappointing for Max Holloway but a big opportunity to gain back some of that steam against the oncoming Calvin Kattar.”

Kattar is 6-2 since making his promotional debut at UFC 214 and earned a unanimous decision over Andre Fili. The Massachusetts native also holds stoppage wins over Shane Burgos, Chris Fishgold and Ricardo Lamas during his rise up the divisional ranks. The 32-year-old’s octagon losses went to the judges’ scorecards against Renato Moicano and Zabit Magomedsharipov.

After picking up his first UFC main event win in July, Anik sees potential big things for Kattar as he looks to earn a potential title shot this Saturday.

“With respect to my guy [Kenny Florian], I think Calvin Kattar is probably Boston’s best hope for a UFC champion,” Anik explained. “I think he has most of the tools you need. I think it’s gonna be a byproduct of getting the big fights and staying healthy. I hate to keep banging this drum but his hands were pretty sore after the Dan Ige fight. This is a 25 minute fight and I do think you have to be measured and try to maybe conserve some energy, and some health early on in a 25 minute fight.

“But what a great main event on ABC. I can’t see how this is boring. [It’s a] nice showcase for those two guys and hopefully for the Bostonians, Calvin Kattar is dropping that Methuen accent on the ABC masses at the end of the fight. You never know.”

One of the storylines being discussed ahead of the first main event in 2021 is whether or not Holloway is over losing on the scorecards to Volkanovski in July. Kattar believes Holloway could be possibly overlooking him, as he explained to MMA Fighting in December.

Anik can understand why people might feel that way, but in his mind, it seems to be more of a storyline for storyline’s sake.

“I think he’s the greatest featherweight of all-time,” Anik stated. “He may not have the title defenses that Jose Aldo does necessarily, but he’s the greatest featherweight of all-time. The version he presented against Alexander Volkanovski, and against City Kickboxing, and against Eugene Bareman and that great team that was trying to beat Max Holloway and his great team, those adjustments, that performance in the rematch, should be hugely encouraging to Hawaiians and to Max Holloway fans.

“I think he is an elite enough athlete physically and mentally that you can expect a prime, primetime performance from Max Holloway. I still think he’ll get a great shot from Calvin Kattar, but I certainly think Holloway should be entrenched as a two to one favorite and I expect him to be as good as ever, and as good as he was in the Volkanovski fight a few months ago.”