UFC 255 Aftermath: In Deiveson Figueiredo, the UFC finally has the kind of flyweight champion they’ve always wanted
This topic has been deleted. Only users with topic management privileges can see it.
F
F
fightgal Reply Quote 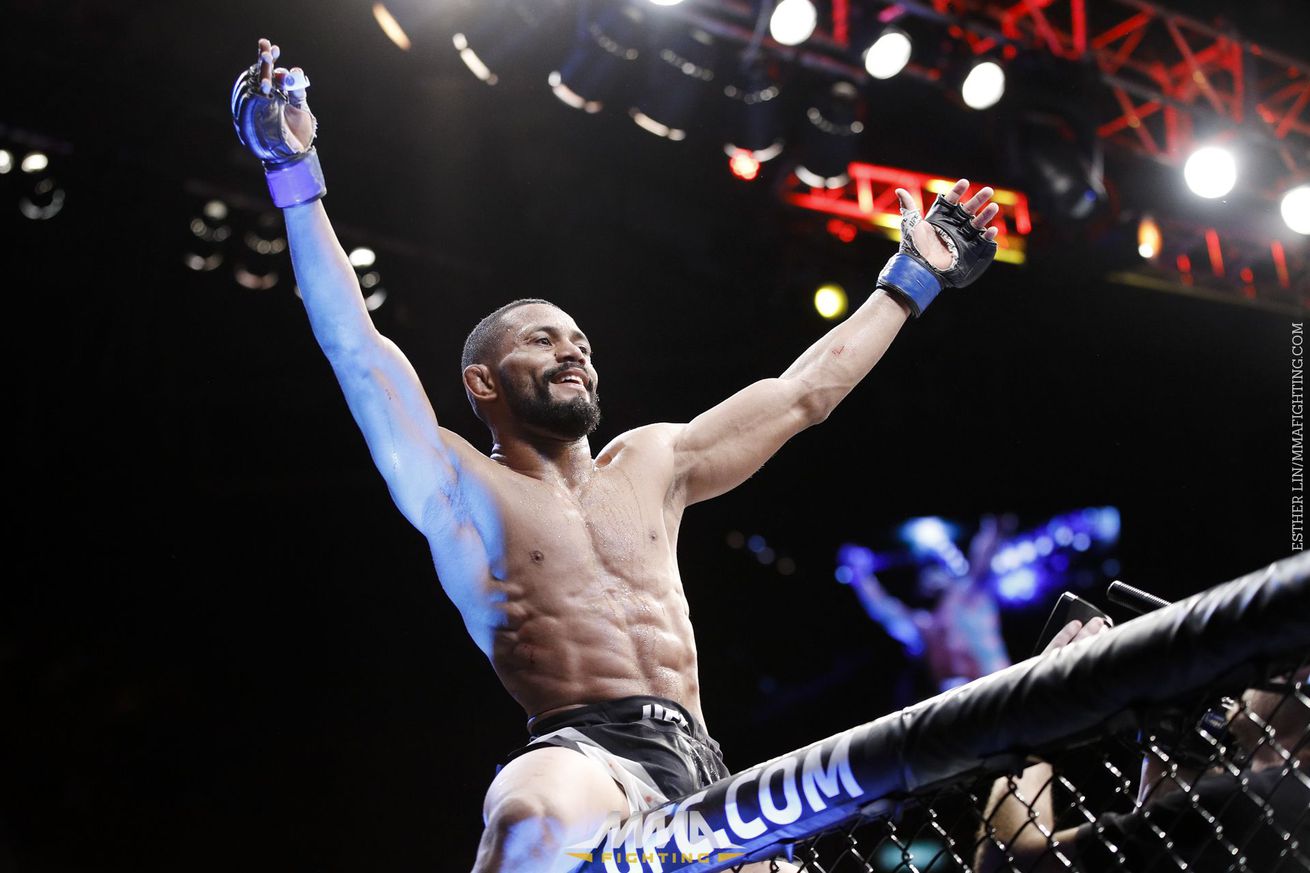 Last night, at UFC 255, Deiveson Figueiredo made the first defense of his flyweight title, submitting No. 4-ranked contender Alex Perez with a guillotine choke in the first round. It was an outstanding performance from the champion and the near flawlessness of it has allowed the UFC to already go ahead and book another title defense, this time against fellow UFC 255 winner Brandon Moreno for UFC 256, less than three weeks from now. The turnaround will be the fastest in UFC championship history but should Figueiredo come out victorious, it will also give the flyweight division something it has always needed: a champion the UFC wants to promote.

Last night, the commentary team for UFC 255 kept repeating the notion that in Figueiredo, the UFC finally had an exciting champion to carry the mantle. And while that is a ridiculous and disrespectful claim to Demetrious Johnson—a man who knocked out Joseph Benavidez even more impressively than Figueiredo did and who threw another man in the air and armbarred him like a grappling dummy, all while establishing himself as one of the all-time greats of the sport—there is a kernel of truth in it. Not that Johnson wasn’t exciting, it’s just that his brand of excitement was harder to understand.

“Mighty Mouse” was a superb fighter, capable of thrilling performances. However, one thing he never was during his title reign was intimidating. No challenger stepping in against Johnson, no matter how overmatched, was ever afraid of doing so. Sure, DJ might ruin your night, but he wasn’t going to ruin your life. Johnson outthought, outfought, and outworked opponents. He showed clear superiority to them and he ran up the score. If you left it out there, then he would finish you because that’s the smart thing to do, but rarely was DJ coming into a fight and looking to hurt someone. In short, DJ defeated all his opponents. Deiveson Figueiredo beats them.

Just look at last night. Alex Perez is a good fighter and a good grappler. He knows what he’s doing on the floor and the moment Figueiredo locked up that guillotine, you can see the panic in him. He starts defending frantically, trying to shimmy and twist his head out of it, but he can’t get out and so instead he taps roughly a dozen times in just a few seconds, like a man whose head is caught in a vise and he wants to be free of it before it crushes him. It’s the exact same reaction Tim Elliott had when caught in Figueiredo’s guillotine last year. Then, of course, there are the fights with Joseph Benavidez. Joe B is one of the best fighters in the history of the UFC, a man who had only been stopped once in his career (the aforementioned KO to Johnson), and he got his doors blown off twice by Figueiredo this year.

It’s pretty clear that in the last year, Figueiredo has leveled up his offense, and that’s a very good thing for the rest of the flyweight division (even if it’s a bad thing for all of their title aspirations). Because despite serving as the home to the greatest champion in UFC history, the 125-pound division has long been the disdain of the UFC brass. After all, following Demetrious Johnson’s controversial loss to Henry Cejudo in their rematch, the UFC opted not to book a trilogy fight but instead to trade one of the greatest fighters of all time to a competitor. That’s not something you do if you’re invested in the long-term health of your division. In fact, for much of the last few years it has seemed like the division was going to be closed down permanently, in large part because the UFC never found a champion they liked (or that champion decided he didn’t like cutting weight). Now, it seems, they have one.

Figueiredo will never be the biggest star in the UFC—he does not speak English and he’s a small person, those factors alone limit his ceiling in that regard—but he doesn’t have to be a star to keep the flyweight division from being shuttered. All he has to do is keep putting on dominant, exciting, violent performances, and if last night is any indication, that won’t be too difficult for him.

“If you’re going to go out and be safe against somebody like Jennifer, what are you going to do against Andrade? Andrade is going to bring her a lot of things she’s never seen before, not to mention the power Andrade has. She just knocked the No. 2 girl in the world with a body shot. She’s a real problem for Shevchenko.” - Dana White on Valentina Shevchenko’s next challenger.

“‘Shogun’ looked old and looked like a shell of his former self tonight. Yeah, I’d like to see him hang it up hopefully.” - Dana White on Mauricio Rua’s performance against Paul Craig.

“That was a lamb being brought in to a slaughter to build up that Golem mfer and let me heal from covid. It’s just business.” - the man who was supposed to headline UFC 255 with Figueiredo, Cody Garbrandt.

Deiveson Figueiredo: Against a challenger who was not a walkover on paper, Figueiredo walked right over him with a first-round stoppage win. Not only did he finish Alex Perez, but to make matters more impressive, he did it in the area Perez was supposed to be advantaged, with grappling. It’s going to take a lot to get the belt off Figueiredo.

Jennifer Maia: It’s not often your stock rises when you only win one round of a five-round fight, but such was the dominance of Valentina Shevchenko that making her look mortal for even a brief moment is impressive. No one was giving Maia a chance heading into this fight, and while that notion still wasn’t wrong, Maia definitely exceeded expectations.

Katlyn Chookagian: Cynthia Calvillo was a fairly sizable favorite heading into this fight despite Chookagian having fought for the belt not that long ago and Chookagian showed why that was dumb. She’s never going to win the title, at least not while Shevchenko remains in the division, but Chookagian still has a lot left to offer at 125.

Brandon Moreno: The finish was definitely a little odd but it doesn’t matter. Moreno got a first-round win over a ranked guy and set himself up for the quickest title fight turnaround in UFC history.

Joaquin Buckley: Coming off his viral knockout last month, Buckley put another impressive highlight on the resume. We still can’t be sure how good he actually is but Buckley is going to get more love from the promotion with performances like this.

Alex Perez: The reality is, Perez was in a no-lose situation last night. He was afforded a title shot by virtue of timing and an injury, not because he was really ready for one. Perez still has a bright future inside the UFC. No shame in losing to a guy who is looking like the next truly dominant champion.

Paul Craig: Craig managed to avenge his earlier draw with Shogun and did score a win over a future Hall of Famer but really, nothing about this outcome was surprising. Craig is in the thick of his career and Shogun probably shouldn’t be fighting anymore. In the words of Max Holloway, it is what it is.

Valentina Shevchenko: When you are a -2000 favorite and being discussed as the most dominant champion in the sport and one of the Greatest Female Fighters Ever, your performances are held to a different level of scrutiny, and like prime Anderson Silva, “Bullet” laid an egg. Yes, Shevchenko clearly won four rounds and never seriously looked to be in danger of losing the fight, but in the scheme of things, this was not a good performance. For this first time at 125, she looked vulnerable and now all eyes will turn to a fight with Jessica Andrade.

Mike Perry: Perry missed weight by a lot for this fight and showed zero remorse for his lack of professionalism. Then he got worked over by a guy he was a clear favorite over, in part because he once again didn’t bring real coaches with him to corner him during the fight. If the UFC cut him right now, it wouldn’t be unreasonable.

Cynthia Calvillo: Calvillo came into this fight trying to make her case for a title fight, but really all she did was make the case that fans should urge her back down to 115. Calvillo clearly had issues navigating the size disparity between herself and Chookagian and though she was competitive, she never really could get going.

Mauricio Rua: Shogun is 38 going on 60 and he looked every bit of his fight age last night. The man is a legend in the sport and future Hall of Famer. He has nothing left to prove and at this point, should hang them up.

As always, there were some weird scorecards and minor officiating snafus but at this point, that’s to be expected for any UFC event. There was, however, one pretty major announcement on the production side of things and that is the induction of Marc Ratner to the UFC Hall of Fame.

Ratner is currently the Vice President of Regulatory Affairs for the UFC and it’s not an embellishment to say that he has done as much as anyone for the growth of the UFC and MMA in the United States. Ratner helped get the UFC legalized everywhere (remember when MMA was actually illegal in a lot of states? Wild times) and has continued to push for the growth of the sport and the safety protocols it uses. On top of that, no one has a bad thing to say about him, which is exceedingly rare in the world of fight promotion. A well-deserved honor.

Deiveson Figueiredo vs. Brandon Moreno: Luckily, the UFC has already done so. That was easy.

Valentina Shevchenko vs. Jessica Andrade: It could have just been an off night for the champion but Maia matching her physicality makes Andrade an intriguing challenger for Shevchenko.

Jennifer Maia vs. Cynthia Calvillo: I wouldn’t balk at a Maia vs. Lauren Murphy fight but Murphy is in the neighborhood of a title shot and if Maia beats her, they just knocks off a contender for no reason. A fight with Calvillo could put either woman back in the hunt at 125.

Alex Perez vs. Brandon Royval: This is probably the fight both men should have had last night anyway and is a much better level set for the young contenders.

Tim Means vs. Nicolas Dalby: Means and Dalby both picked up big underdog wins last night and aside from making sense, this would just be a fun scrap to watch.

Paul Craig vs. winner of Ryan Spann vs. Misha Cirkunov: Despite Shogun’s advanced age, a win over a name is still a win over a name and Craig should get the chance to parlay that into bigger things. A fight with a low-end top-10 opponent makes sense.

Joaquin Buckley vs. Darren Stewart: As impressive as Buckley has looked in his last two fights, he needs to keep developing and Darren Stewart is the kind of well-rounded, durable fighter who is a good step up in competition.