The Great Divide: Did Dan Hardy cross the line publicly criticizing Herb Dean?
This topic has been deleted. Only users with topic management privileges can see it.
F
F
fightgal Reply Quote 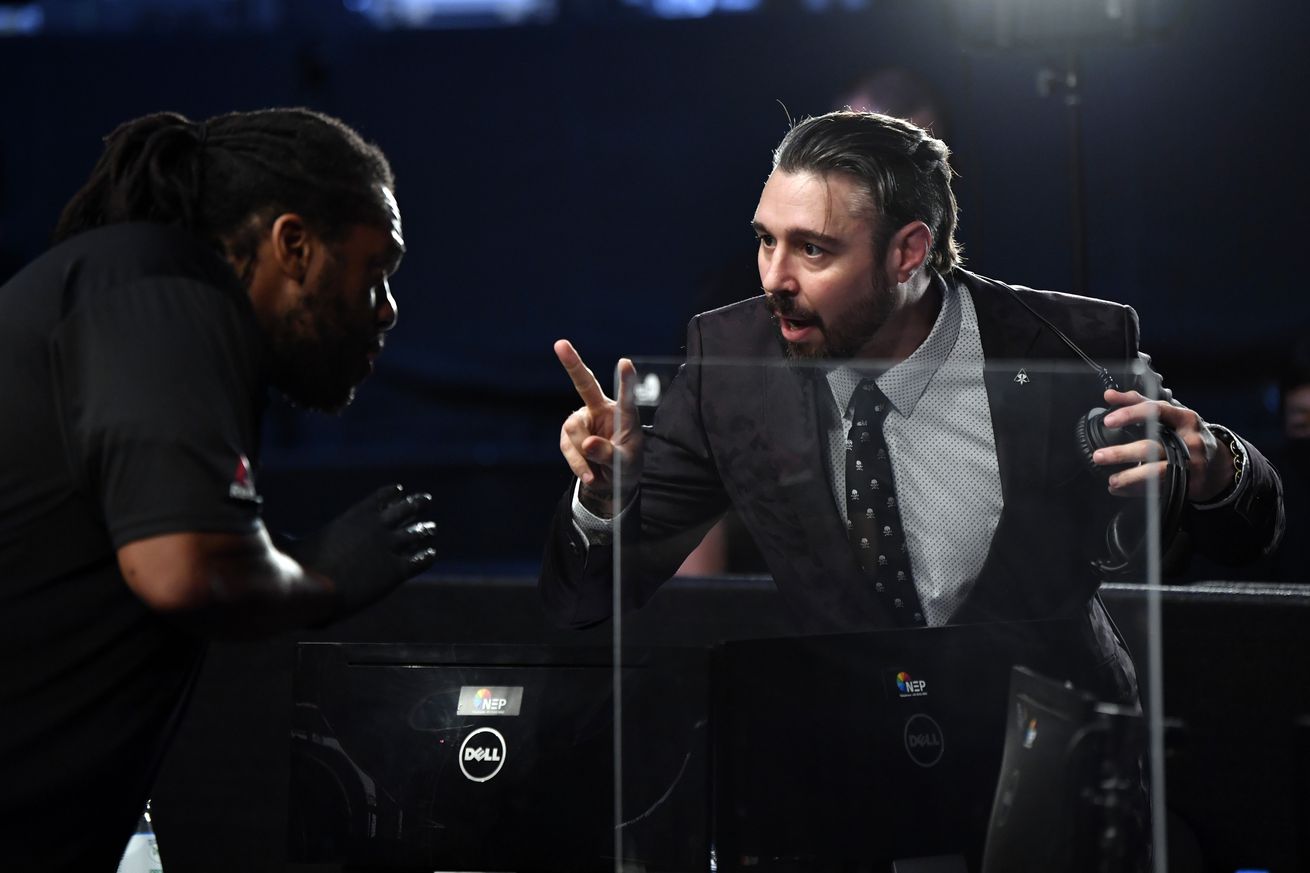 The Great Divide is a recurring feature here at MMA Fighting in which two of our staff debate a topic in the world of MMA — whether it’s news, a fight, a crazy thing somebody did, a crazy thing somebody didn’t do, or some moral dilemma threatening the very foundation of the sport — and try to figure out a resolution. We’d love for you to join in the discussion in the comments below.

Overshadowing the Fight Island finale, the on-screen dispute between Dan Hardy and veteran referee Herb Dean from UFC on ESPN 14 is arguably the hottest topic in MMA at the moment.

ICYMI: Dean was the third man in the cage for Francisco Trinaldo’s incredible comeback win against Jai Herbert, but Hardy and fellow commentator Paul Felder made it clear on the broadcast that they felt Dean should have called the fight much sooner following Trinaldo’s tide-turning punch.

While the quality of the stoppage is certainly up for debate, on this edition of The Great Divide, Alexander K. Lee and Steven Marrocco are focusing primarily on the reactions of the two men involved to determine who (if anyone) is in the wrong.

THE CASE FOR HARDY

Lee: Full disclosure, I reacted just as Hardy did in the moment, and my opinion that the stoppage was late has only been reinforced by repeat viewings. So my side of the argument is colored by my feelings about how Dean handled the situation.

With that in mind, Hardy did nothing wrong. Did he act in a completely professional manner? Absolutely not, but when it comes to sports commentating, particularly in the UFC, professionalism isn’t at the top of the requirements list when it comes to broadcast desk assignments. This is the same promotion that eagerly tweets out clips of commentators jumping out of their chairs in reaction to a big finish, has commentators providing analysis on fights featuring people they are actively training or feuding with, and (this was more common during the FOX era) verbally jousting with guests on-camera just moments after they’d stepped out of the cage.

What the UFC and ESPN wants is human reactions from well-known MMA personalities, and that’s exactly what Hardy gave everyone on Saturday night.

“Stop the fight!” That’s what Hardy shouted, and when he did so is key to supporting his case. It wasn’t when Trinaldo decked Herbert or even when Herbert’s head bounced off the mat in grisly fashion. There was almost a full five-second gap between Trinaldo seemingly ending the fight and Hardy’s outburst. He waited and saw the same things Dean saw: A dazed fighter on his back, his opponent reluctant to land follow-up shots.

Dean had the best view of the action, and it’s his job to officiate fights, not Hardy’s. But if Hardy just sat there and didn’t speak on what he felt was an error, then he wouldn’t have been doing his job. Agree or disagree, he’s there to give viewers his honest assessment of the action, and in this case, he couldn’t bite his tongue. He couldn’t hold back when he saw a fellow fighter in what he perceived to be serious danger.

Afterward, Dean and Hardy spoke to one another at the commentary desk and it didn’t exactly look like Hardy was interested in de-escalation. The still images alone look like production photos from a Netflix drama. In an ideal world, these confrontations wouldn’t happen publicly, but Dean is human, too, and he can’t be blamed for wanting to settle this in real time either, especially knowing that Hardy’s cry of injustice was broadcast to millions around the world.

Besides, for those asking whether Hardy would be better served having a backstage talk with Dean or digging deeper into the intricacies of officiating to better serve the MMA community, that ignores the influence a commentator can have. By calling out Dean in the most public manner possible, this is Hardy’s way of trying to enact positive change even if the message is bound to be muddled given the delivery and circumstances. When veteran officials like Dean make mistakes, there might be backlash from fans, but we rarely see any sort of official accountability.

By airing his grievances on air, Hardy held Dean accountable. Raising awareness and bringing an issue to the court of public opinion can be effective when wanting to instigate change, whether we’re talking about Dean’s officiating or another referee’s.

Dean called Hardy’s actions “very dangerous,” due to the fact that it could possibly influence a referee or the fighters. That may be true, but in this instance, Hardy was calling what he saw and what saw was a fighter all but finished. Clearly, the shouting did not affect Dean’s call to wave off the bout unless he was so caught off-guard by it that it temporarily caused him to freeze up. If that’s the case, then we should be questioning Dean’s ability to handle a tense, split-second decision like that, not Hardy’s show of emotion. Dean has officiated a lot of fights and normally has thousands of people shouting, so if he can’t filter out one (admittedly clear and particularly passionate) voice, then that is troubling.

It’s certainly more troubling than a fighter who’s heavily invested in the sport doing exactly what he’s paid to do: Call the action. It isn’t always pretty. If the UFC just wants cutesy reactions and quotable sound bites, they have a whole roster of personalities who would be happy to collect a check and sing the same old songs. If they want someone to challenge, not just celebrate, what he’s seeing in front of him, then they know who to call.

THE CASE FOR DEAN

Marrocco: I think it’s important to drill down more specifically the jobs to which Herb Dean and Dan Hardy are assigned. Although they undoubtedly share the desire to protect the health and safety of the fighters, they have different perspectives and histories they bring to the tasks.

Hardy does more than just call the action. Technically, he’s the color commentator. Whereas the play-by-play person is more in charge of the whos and the whats of the action, or the Xs and Os of competition, the color person is in charge of the why and the how. Inasmuch as there are any set standards in the fight game, they are supposed to opine on what’s going on and have a reaction. Depending on the promotion that employs them, they may have more discretion when it comes to what they can and can’t say (and if you’ve heard some of Joe Rogan’s verbal stylings, you can deduce the UFC gives a wide berth). Dean’s job, on the other hand, is to enforce in a dispassionate manner the rules of the fight. (When it comes to how and when a fight should be stopped, the rules are a quick read.)

The thing here is, Hardy did a little bit more than his job. He didn’t just call the fight, he got up and stuck his finger in Dean’s face (OK, in the direction of Dean’s face). Given the hay made over this, it’s hard to argue he brought more attention to the issue of officiating. But at what cost? Dean is a thick-skinned individual—to be in this job as long as he has, you’ve got to be—but when you have to stop your job to deflect incoming fire from promotion employees, you’re setting a precedent that could be detrimental to the sport on a long-term basis.

I agree that regulators are not nearly transparent or proactive enough after the fact in addressing the mistakes that are inevitable in such a complex sport. I’m just not sure the solution to that is escalating verbal and physical confrontations on fight night. Just like it’s probably a bad idea to put a judges’ score against the hometown guy on the big screen in real time, it’s just not a road we should go down for a group of people who do an incredibly complex and largely thankless task.

If it’s your goal to get officials to be better, you want to eliminate any distractions that keep them from doing their job. And although it came off a little ham-handed and over-dramatic, I think that’s what Dean was trying to say when he called Hardy’s behavior “dangerous.” Dean can take all this stuff. It’s the people coming after him who might take pause if what happened this past Saturday is the new normal. Hardy’s outburst feels short-sighted if you consider the chilling effect it might have on other officials, and it’s arguably disingenuous when you consider Dean’s history.

Dean has screwed up a few calls, to be sure. And he had a couple of bad ones on Saturday night. But that’s a pretty small sample size. Hardy should be taking that into consideration as someone who knows this sport inside and out. And while we agree the stoppage on Jai Herbert was a little late, there’s been far, far worse. You can’t always control your reactions, but I question why Hardy chose to directly confront Dean in such a public way on this particular fight.

Regardless of my own personal feelings—and in real time, I inquired to my colleagues without prompting whether Dean was waiting for a written invitation to wave it off—I am inclined to say it was a bad call and move on. Barring a longer period of bad decisions that lead to immediate and serious injuries, I’m not of the opinion that Dean should be censured or dismissed. When you look at his full body of work, those f-ups dwindle quickly in number. And while I think he was a bit late on Herbert, I accept to a certain degree that it’s the inevitable product of thousands upon thousands of exposures to high-level MMA, where the toughest of the toughest compete and fighters often react in unpredictable ways to taking damage. When it comes to Dean’s breadth of knowledge about applying the rules of this sport, a totally different gig than having a reaction to the fights, there are few out there who can compete.

Like I said earlier, the manual for deciding when a fighter has had enough is pretty thin. There’s no rule that says if a fighter is dropped and takes four punches, the fight is over. It’s understood that a fight should be called off when a fighter can no longer intelligently defend themselves. But there’s a lot of room for interpretation on when that moment arrives. We’ve empowered our referees, the sole arbiters of the contest, to make the call. And while I do believe referees should be held more accountable, I don’t believe in standing in their way of doing it in the moment, which is why Hardy crossed the line.