Referee Herb Dean responds to criticism over controversial stoppage at UFC on ESPN 14
This topic has been deleted. Only users with topic management privileges can see it.
F
F
fightgal Reply Quote 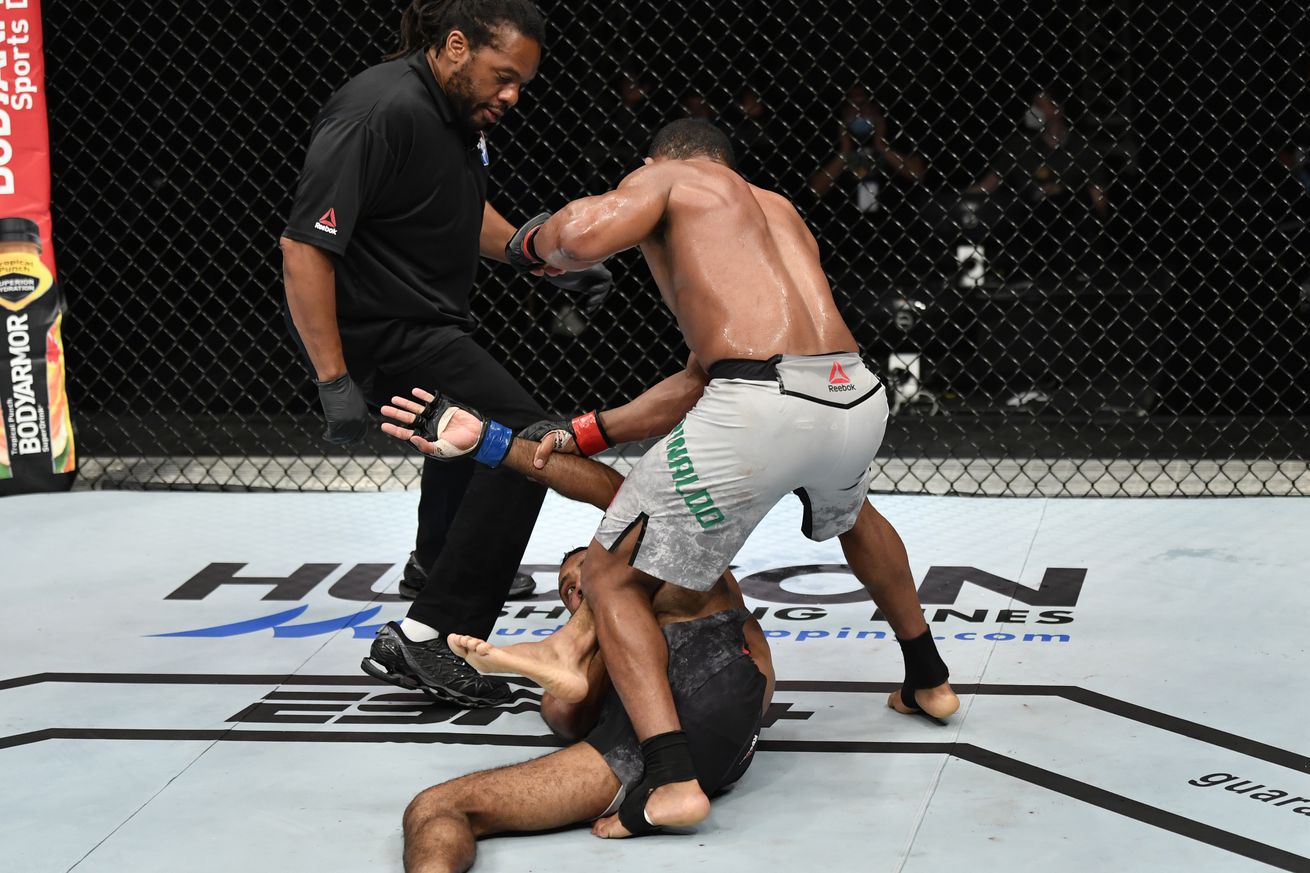 Referee Herb Dean saw no issue with his stoppage in the clash between Francisco Trinaldo and Jai Herbert at UFC on ESPN 14 but he definitely has a problem with somebody cage side trying to tell him how to do his job.

On the prelims from Abu Dhabi on Saturday night, Trinaldo uncorked a huge overhand left that blasted Herbert on the top of his head and sent the former Cage Warriors fighter down to the mat. Herbert was badly dazed and Trinaldo stood over top of his fallen opponent because he believed the fight was already over but Dean waited until a few more punches were thrown to end the contest.

Afterwards, UFC color commentators Dan Hardy and Paul Felder admonished the referee for what they believed was a terrible decision on Dean’s part to allow the fight to continue after Herbert took that initial punch that sent him crashing to the ground.

Now Dean has responded while pointing out what he saw happening in front of him.

“There’s a fight that some people said could have been stopped earlier, think it was stopped late. By no means was that a late stoppage,” Dean said in a video posted to his Instagram page.

“Anyone who believes or not is maybe just following because someone with a microphone says it’s a [bad] stoppage. But if you know anything about fighting, a fighter got hurt, fighters get rocked all the time but we’re looking at his actions. He’s tracking his opponent. He knows where his opponent is. He’s put both arms in between him and his opponent. He’s lifted his leg up, head off the mat. He’s doing everything I can ask for him to do to stay in that fight. There wasn’t a bad stoppage.”

While he defended his decision, Dean also took aim at the person sitting cage side who was shouting at him to stop the fight after Herbert took that shot from Trinaldo.

Dean never addressed him by name but a quick look at the replay shows Hardy standing up from his seat and shouting “stop the fight” at the referee.

“During the match, someone yelled out ‘stop the fight,” Dean said when addressing Hardy. “This is really interesting because there’s only professionals there. There’s not one fan in the building. Everybody has a job there, everybody knows what they’re job is and they have specific duties. I have a job to referee the fight. One of my duties is to stop the fight when the fighter’s taken too much damage.

Dean went onto explain that having another person outside the cage shouting at him to stop the fight could adversely affect his ability to properly call an end to the contest.

“I don’t know who it was that did it cause I was looking at the fight but I heard it,” Dean said. “But I assumed that it was either the two people authorized to do it — the doctor or the corner.

“After the match, I followed up, I asked the physician, he goes ‘no, that fight was fine, I’m perfectly fine with everything you did in that match.’ I didn’t get the chance to ask his corners but I asked the inspectors who were in charge of his corner. They said no, the corner did not yell out to stop the match.”

While still avoiding Hardy’s name, Dean detailed why someone shouting at him during a fight is such an unprofessional precedent to set, especially in this situation when the entire arena is empty and the only people cage side are officials working the event.

“This is a very dangerous thing to do,” Dean said. “If you put on your Superman shirt and decide that you’re the smartest person in the room. Smarter than the physician, smarter than the corner who works with the guy and smarter than the referee, you’re doing a chance that you could bring in information that could do the fighter disservice. I’m looking at the match, I believe I’m getting information from the people qualified to do it.

“Under no circumstances, even I as a referee, get up and yell and tell another referee to stop the match. If I were to do that, I would know it would be a situation where I couldn’t live with myself otherwise. I know that there could be consequences that you’d never see me in that position again but I would sleep well knowing that I did that.”

In the same video, Dean promised to go over a detailed version of the stoppage in the future but right now he’s mostly just angry that Hardy shouted “stop the fight” while he was still refereeing the match.

“If you open your mouth and yell the words ‘stop the fight’ it could easily be mistaken for the people who are officially qualified to yell stop the fight,” Dean said. “It should never be done.”

At the end of the fight, Hardy also confronted Dean as he was leaving the octagon and they shared a few words before separating. Following the event, UFC officials said they would be investigating the incident.